King cobras are active by day and night, but are rarely seen. They hunt by smell, 'tasting' the air with their forked tongues to track their prey. 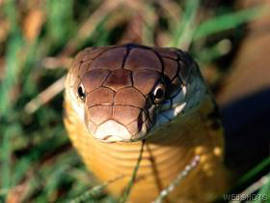 Habitat: Dense highland forests, up to 2000m above sea level, usually near water.

The king cobra kills and eats other species of poisonous snake. It is the longest of all the venomous snakes, and its bite can kill a man in 15 minutes, yet it prefers to avoid confrontation.

Daily Life: King cobras are active by day and night, but are rarely seen. They hunt by smell, 'tasting' the air with their forked tongues to track their prey. When they get close, they use their eyes to pinpoint their victim before striking, injecting a massive dose of venom. They are then able to swallow their victims whole while they are still alive. They have no limbs with which to rip their prey apart, so their lower jaws are independent, and are only loosely attached to their skulls. By using alternate movements of the lower jaws, they are able to drag their prey into their mouths. Large victims can take several hours to swallow, but after a large meal a king cobra will not have to eat again for a few weeks.

Toxic venom: King cobra venom is very toxic. A single bite can kill an Indian elephant in three hours, provided a vulnerable spot is bitten. The fangs of the king cobra are around 15mm long, but can deliver more venom than any other snake except the gaboon viper. When threatened, the king cobra can raise itself up to one third of its length - in some cases this is taller than a human. It is also able to flatten the ribs of its neck into an intimidating hood to make itself appear larger. However, the king cobra is not an aggressive snake, and is much more likely to glide away than to attack.

King cobras shed their skins at the beginning of the breeding season. When the female sheds her skin, a scent or pheromone is released, which attracts a male to her. They may remain entwined for many hours while he fertilises her. Unlike most snakes, king cobras can form stable pairs, and the male and the female may co-operate in searching for a nest. Once a site has been found, the male lurks nearby, ready to fight off any egg-eating predators. About 20-50 white eggs are laid by the female. Newly-hatched king cobras are glossy white with yellow stripes, and are already about 50cm long. They are able to hunt almost immediately.