the bottle nose dolphin is one of the most well-loved mammals on the planet. 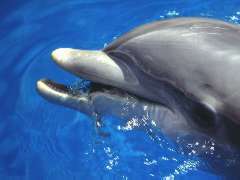 Bottle nosed dolphins communicate by a series of whistles and clicks, and though experts are unsure of how complex this communication is, individual dolphins can definitely recognise and respond to each other. Like all dolphins, they use echolocation to form a 'picture' of their surroundings in murky water. They emit a series of loud clicks which travel through the water - if  the sound hits a solid object, an echo is bounced off it and returns to the dolphin, which is then able to interpret the sounds into a map of its surrounding environment.

They also have their very own series of whistling noises that they use to identify themselves. Every dolphin has a unique sound, almost like a name. It appears that they are able to recognise and remember individuals that they meet, even having been separated for many years. Different groups of dolphins also develop their own community 'songs' and teach them to new generations.

When dolphins and humans fish in the same area, there can be conflict. Many thousands of dolphins drown in fishing nets each year.  Bottle nosed dolphins have been known to support people fishing by driving fish towards the nets and then taking their share of any that escape.

Dolphins have been trained by the military to hunt for lost swimmers and to use their sonar to detect mines under the water.

Bottle-nosed dolphins are often used to entertain humans, as they are the species most commonly trained in dolphinaria. They are  able to solve problems and even to turn them to their own advantage. One dolphin, named Kellie, was being trained to collect pieces of litter, found in the ocean. For each piece she returned to her trainer, she received a fish. It was soon noticed that Kellie would find a single piece of paper, then would tuck it under a rock and tear bits off it, returning these one at a time in order to be given more fish!

Questions have been raised as to whether keeping dolphins in captivity is cruel. Some trainers build up strong relationships with their dolphins, but keeping any animals such as dolphins in captivity is questionable, as no pool, no matter how large can ever be the same as the open ocean. Dolphins have larger brains than humans and are intelligent, highly social animals. They typically live in family groups called pods. Removing these animals from their groups and keeping them in captivity is now believed to cause depression and distress to the animals.

Bottle-nosed dolphins mate in the spring and summer, and females give birth to single calves about 10-12 months later. Although they are capable of giving birth unaided, two or more 'midwives' often help with the delivery by tugging at the newborn's tail and whistling encouragement. They also protect the vulnerable mother and her calf from sharks.

Bottle nosed dolphins are commonly sighted around the British Isles, where they are seen mainly in seas to the south and west. Their diet comprises eels, squid and salmon, anchovy, capelin and other inshore fish, as well as shrimp.