Many kinds of dolphins and porpoises are sociable animals and live in schools varying in size from a small family group to around 1,000 individuals. 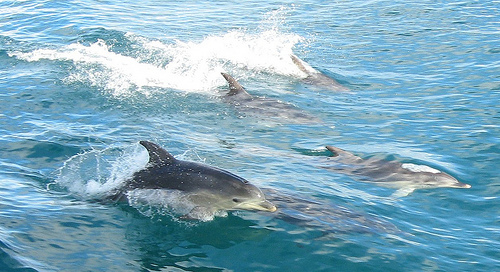 What Type of Animal is a Dolphin?

Dolphins are part of the mammalian order Cetacea, which contains about 90 species of whales, dolphins and porpoises. Of these, the gigantic blue whale is the largest and the freshwater or river dolphin the smallest. A big blue whale may attain a length of 31m (104ft) and weigh up to 125 tons, while the La Plata dolphin will rarely exceed 1.75m (5.7ft) in length.

The largest member of the dolphin family is the killer whale (Orcinus orca), which grows to a length of 9m (29.5ft) and weighs about 10 tons. Killer whales hunt in packs and will kill fish, squid and marine mammals such as seals and whales - including other dolphins! The killer whale is found in all the oceans of the world wherever suitable prey species exist.

The dolphins are considered to be, next to Man, the most highly intelligent of all animals. Their relative body to brain size is similar to those of humans and their ability to reason, learn and communicate has amazed scientists who have worked with these interesting animals. Sadly, several hundred thousand dolphins of various kinds die each year by accident as they become entangled in fishing nets and drown.

Dolphins have been able to demonstrate understanding and mimicry of humans and other dolphins. Different local groups develop their own 'cultures', such as types of hunting methods that are passed down through generations. Dolphins each have their own individual sound, the equivalent of their 'name', which they use to identify one another. They seem to be able to remember each other many years after meeting.