The word dormouse comes from the French word 'dormir' - to sleep. The dormouse is one of the most attractive of Britain's small mammals. 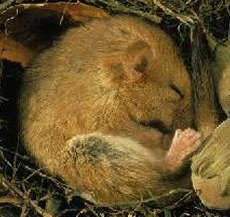 Distribution: found mainly in southern counties from Cornwall to Kent northwards to Herefordshire and into Wales. They are occasionally recorded in the north but not found in Scotland.

Life-span: up to 5 years in the wild; 6 years in captivity.

Dormice are nocturnal (active at night) and use their large eyes, long whiskers and excellent sense of smell to find their way about. They are much more agile than other mice, spending a lot of time climbing around bushes and trees, rarely coming down to the ground. Among the branches they search for flowers, pollen, fruit, nuts and insects. Early in the spring, hazel catkins and spring flowers provide a nutritious food and the dormouse's whiskers carry pollen from flower to flower which helps pollination. Fruits and nuts become available as summer progresses into autumn so the dormouse needs a habitat containing a good variety of plant species to ensure a continuous supply of food.

During the day, dormice sleep in a nest, often in a hollow tree branch or old bird's nest-box, several feet off the ground. A nest is domed in shape about 15cm (6in) across, and to build it the dormouse shreds honeysuckle bark, weaves it into a ball and may surround it with leaves. The dormouse usually forages no more than 70 metres from its nest.

An old English name for the dormouse is 'the sleeper'; it is the only British rodent which hibernates, and it does this from about mid-October until April or May. Before hibernation, a dormouse eats as much as it can in order to build up a fat store.

It makes a nest deep in a hedge or on the ground, lines it with grass, wool, leaves etc, and prepares a little store of food in case it wakes up during a warm spell. Then it curls up into a tight ball and goes to sleep.

The body temperature drops to that of its surroundings and its heart and breathing rate are often reduced by 90% or more - this saves energy and allows the dormouse to survive for about 6 months on its body fat. As the weather warms up, a hibernating dormouse's body temperature begins to rise and it takes about 20 minutes to become fully awake.

Threats to the Dormouse

The dormouse population is in serious danger, with numbers estimated to have fallen by 52% since 1995. The loss of ancient woodland and hedgerows across the UK is thought to be a major reason for this decline, as dormice will not leave the safety of trees to cross large, open spaces.  In the days when people spent many hours trimming hedges and clearing ditches by hand, or harvesting poles from coppiced trees, many a sleepy dormouse was discovered. Today these jobs are done by machines so dormice are less likely to be noticed.

Natural predators such as owls, weasels and stoats eat dormice but their decline is almost entirely due to the loss of woodland habitat and changes in woodland management practices; some large woods have been divided into much smaller woods and often these do not provide enough habitat for the dormouse's needs.

Coppicing, particularly of hazel, was once carried out in many areas. This traditional management provided a perfect habitat for dormice, with spreading branches which acted as pathways, lots of different shrub species and not too much shade from large trees overhead. In some areas, coppicing is once again being carried out, but to suit the dormice there must be a rotation of 15-20 years between coppicing to allow the hazel to bear nuts. Also, the cleared area must not be too large.

The People's Trust for Endangered Species (PTES) record sightings and have volunteers across the country helping to document dormice data. In 2013, they were sent 6,531 hazel dormice records from 373 sites..

The most important thing is to manage woodlands carefully with dormice needs in mind. They can also be helped by putting up nest-boxes in suitable woods. A dormouse nest-box is very like a bird-box, but it has the entrance hole at the back, facing the tree trunk. The People's Trust for Endangered Species has their own Guide to Managing Small Woodlands for Dormice.

Although dormice are very hard to find, it is possible to find out if they are living in a woodland by searching for hazel nut shells that the dormice have opened. They eat them when they are green and still on the tree, but the shells turn brown once they fall to the ground. Other animals eat hazel nuts too but you can usually tell what has opened the nut. Small rodents gnaw holes in the shell and leave characteristic marks around the edge.

Have you spotted a dormouse?

The People's Trust for Endangered Species (PTES) are recording sightings - tell them about it here by clicking here.

The word dormouse comes from the French word 'dormir' - to sleep. The dormouse is one of the most attractive of Britain's small mammals. It is a member of the rodent family which means it has prominent, strong and sharp front teeth (the incisors) for gnawing food.

Around 100 years ago, dormice were more widespread and often kept as pets in the countryside. They were made famous through the Mad Hatter's tea-party from Alice in Wonderland. Unfortunately, today they are a rare and endangered species and few people are lucky enough to see one in the wild.

Dormice usually have one, sometimes two, litters a year, between May and September. There are about 4 young, born blind and naked. They soon grow grey fur, but by the time they leave the nest at 4 weeks old they are almost the colour of the adults. The breeding rate depends very much on the weather. In a year when food is scarce or when bad weather has prolonged hibernation or restricted the dormouse's feeding time, most litters may not be produced until August, September or even October. In these cases, the young dormice may not be able to build up enough fat to survive the winter.