The fennec is one of the smallest of all foxes, but it has the largest ears. Its head and body measure 35-41cm, and ears measure 15cm. 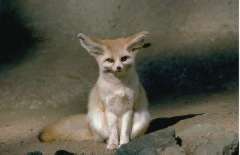 Distribution: Deserts of North Africa and Sinai and Arabian Peninsulas.

The fennec is one of the smallest of all foxes, but it has the largest ears. Its head and body measure 35-41cm, and ears measure 15cm. Its ears allow the fennec to hear the movements of its enemies and prey over long distances, which is very important for a desert animal.  It can even hear it's prey move underground. It lives in the deserts of North Africa and the Arabian and Sinai peninsulas where it is among the commonest mammals.

Fennecs avoid the worst heat of the desert by living in burrows during the day and only emerge in the cool of the night. Burrows are dug at the base of small hills or in other places where moisture is likely to be retained for longest.

As there is little water in the desert, fennecs do not sweat to keep cool. They have a high skin temperature, so that unless the air temperature is very high, heat flows from their bodies. Their big ears are probably an advantage as their large surface area allows a lot of body heat to be lost to the air. Fennecs will also pant like dogs, although as they live in the cool of their burrows during the day, this is seldom necessary.

Beetles and other insects make up the fennec fox's diet, along with spiders, snakes and lizards. They will also eat small mammals including gerbils and jerboas.  Despite the desert's lifeless appearance, there are in fact a large number of animal species available for the fennec to feed on. Scorpions, spiders and beetles make up the majority of the fennec's food. Fennecs will often play with their food, throwing it about and worrying it. They are able to get most of the water they need from their food in the form of body fluids.

Mating season is during January and February, and at this time, males become very aggressive, marking their territory with urine and attacking all strangers. Burrows are dug in March shortly before the females give birth to litters of 2 - 5 young. Some time before the birth, the male begins to bring food to the female who remains in the burrow. This continues after the birth.