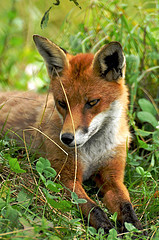 Territory They live as an extended family or small community consisting of a dog (male) and vixen (female) and their cubs; group members also include between one and four other foxes, males and females, perhaps from the litter born the previous year. Although foxes live in a family group, they spend much of their time alone. A fox's range varies according to its habitat; the home range of an urban fox covers between 60 and 120 acres whereas a country fox may wander over 5 acres.

Foxes are mostly active at night, their eyes being specially adapted to night-time vision. The fox's hearing is also excellent, helping it to locate prey easily. Throughout the hours of the night a fox will roam its territory, foraging for whatever food is available. A country fox will eat carcasses or kill small mammals, especially voles and rabbits; in summer it will eat beetles and fruits in the autumn.

A town fox visits households that regularly put out food for them and generally scavenge for anything edible. Town foxes are sometimes accused of killing and eating cats but they rarely interfere with each other's activities - and an adult cat is more than a match for a fox who is likely to be the first to back down in a confrontation!

A fox may, however, take a pet rabbit or guinea-pig if it is not caged securely. Earthworms are an important part of the diet of all foxes. Any spare food is often buried for later, although another member of the family group may find it first.

Although foxes forage alone, members of the group do meet up briefly, perhaps to play or groom each other. During the daytime, foxes usually rest somewhere, perhaps under bushes, in the lower branches of a tree, in a sunny spot on a low roof or under a garden shed.

Foxes breed only once a year, most mating occurring in January or early February. Courting foxes can be heard barking or uttering unearthly screams; the dog and vixen hunt and travel together for about three weeks before mating. The vixen looks for a suitable den or 'earth' - she may dig one under tree roots, or find a hole in a rock crevice, under a garden shed or even in a pile of rubbish!

A litter of four or five cubs is born after a gestation period of 53 days in March or April. They are blind, have round faces and short ears, and are covered with dark, chocolate-brown fur.

The vixen stays with her cubs in the earth until they are two weeks old, relying on the dog fox to bring her food. The cubs grow quickly, their eyes opening when 10-14 days old. At around 4-5 weeks they begin to come out of the earth and their dark fur starts to change to red-brown. Non-breeding vixens in the family group may help the mother to rear her cubs. As the cubs grow up they play, squabble and fight amongst themselves. From as early as four weeks old they fight quite viciously - sometimes even to the death - and in this way they establish their social position.

In October and November most of the young dog foxes and some of the vixens leave the home territory to try and establish territories of their own. Others stay at home. At this time of year many young foxes are killed by cars, dogs etc., or die of starvation or cold during a hard winter. About 55% of foxes die in their first year without having had a chance to breed and 80% die before they are three years old.

The short life-span of a fox means that females will breed only two or three times on average, while males usually only mate once.

The fox has been hunted by humans for thousands of years. Its thick red fur has always been in demand; an increase in the popularity of fox fur in the late 1970s caused many more foxes than usual to be killed. However, with the decline in fur prices, this trade has decreased substantially. Red foxes are hunted for sport, though hunting with packs of hounds is now illegal.

Farmers have always considered the fox a pest because it will prey on poultry and lambs. Nowadays, most chickens are caged up securely so the fox rarely gets the chance to steal them. Foxes have often been accused of killing lambs but they rarely attack strong, healthy lambs; they may, however, take sickly and dead ones. Even though thousands of foxes are killed in Britain every year by hunting and shooting, the overall population does not seem to be affected and foxes are in no danger of becoming rare.

In continental Europe, foxes carry the fatal disease rabies. If a rabid fox bites a pet dog, which in turn bites a person, the virus can be passed on to man. Great Britain is free of rabies but should it ever be accidentally introduced it may possibly be transmitted quickly through the fox population, particularly the urban one. Detailed studies of urban foxes are being carried out and the more we know about their social life the better we can plan how to deal with any future occurrence of rabies.