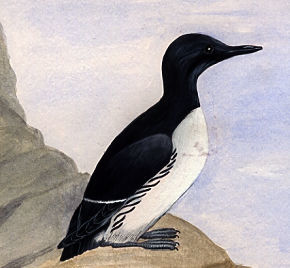 Guillemots, like many other seabirds, begin to gather at their breeding sites, well before breeding actually begins, in late May. They congregate on rocks and cliff ledges, packed tightly together in large colonies; they need to be stimulated by a noisy crowd to mate successfully.

Courtship takes place in the water with one bird swimming around the other which spins to face it. They sometimes indulge in communal displays, several pairs circling and bobbing or standing up and flapping their wings.

The air around a guillemot colony is full of the birds' muttered growls of varying pitch. They are silent for the rest of the year when not breeding.

A single egg is laid directly onto the bare rock - no nest is made. The mottled egg is pear-shaped (pyriform), and this is a special adaptation so that the egg rolls round in a circle when disturbed rather than off the ledge.

The male and female birds take turns to incubate the egg, balancing it on their feet, covering it with their belly plumage. After about 4 weeks, a grey, almost helpless youngster hatches and it will stay on its ledge for four to five weeks. The parents continually fly in and out from the colony to catch fish and regurgitate meals for their baby.

The young guillemots leave their ledges before their flight feathers have fully grown and they are only one-third of the adult weight. They leap off the ledges at night, to avoid predators such as gulls, and plummet down, whirring their tiny, undeveloped wings. On hitting the water they call frantically to their parents who are already at sea. Their parents escort them further out to sea where they are fed for about three weeks until they can fly and fend for themselves. The young birds will not return to land until two or more years later when they are ready to breed.

At the end of the breeding season, about the end of July, all the activity on the rock ledges ceases as the adults fly away southwards and seawards for the winter. The birds winter off southern England, France and Spain. Shortly after leaving the breeding grounds, the guillemots moult, shedding all their flight feathers at once and they cannot fly until a new set grows.

Threats to the Guillemot

Within the British Isles, the guillemot has decreased in numbers over the past centuries, especially in the south of England. The original cause may have been the warming of the sea that reduced the fish populations so affecting the birds' food, but over the past 30 - 40 years oil pollution has had a serious effect.

The auks suffer badly from oil because their reaction is to dive, so becoming even more polluted, whereas other seabirds such as gulls take off and so escape.

More recently, guillemots have suffered from overfishing of sand eels and sprats by humans. Conservationists would like to see this controlled because it is believed to be causing hundreds of birds to starve.

Guillemots fish in the open sea, usually alone or in small groups, during autumn and winter. They look rather duck-like when swimming and they dive below the surface by kicking their feet and partially spreading their wings. Underwater the wings are used for propulsion and the feet used for steering. Fish such as sand eels and sprats make up the major part of their diet. Shrimps, prawns, crabs, molluscs and worms are also eaten, when closer inshore.