The horse may not be used to such a great extent by humans these days, but it is still an important and useful animal. 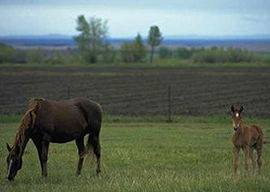 Many years ago it was feared that, after centuries of association with humans, the horse would be completely replaced by our new mechanical inventions, and it was predicted that by the end of the Twentieth Century, the horse would disappear from the world completely.

Perhaps those who predicted the end of the horse family failed to take into account the tremendous appeal that these animals have for us.

The horse may not be used to such a great extent by humans these days, but it is still an important and useful animal and its future - or at least, that of the domestic horse - seems assured.

Wild horses (which include the asses and zebras) are not in such an enviable position however, and some species are in great danger of disappearing in the very near future unless something can be done to save them.

The horse has been associated with humans since the earliest times. We know that the Persian Wild Ass (or Onager) was used by the Sumerians around 3,000 BC, and that in Britain some 2,300 years ago, the Iron Age people used horses.

Some 30 million years after the appearance of Eohippus a new horse-like animal appeared. It was larger than Eohippus (about the size of a lamb) and had only three toes, with the middle toe beginning to evolve into the main support for the foot. This animal, Mesohippus had stronger teeth than Eohippus and it was able to eat both leaves and grass. In the millions of years that followed, these prototype horses were followed by Merychippus and Pliohippus, both bigger and better models. Pliohippus evolved about 12 to 13 million years ago and it had single toes or hooves and ate grass. The scientific Order to which the horses belong is known as Perissodactyla, which means quite simply 'one toe'.

Today, the Family Equidae includes all the surviving horse-like animals (horses, asses and zebras). There is only one true species of wild horse remaining in our world - the Przewalskis' or Mongolian wild horse.

Rapidly decreasing populations of wild asses live in Africa and Asia, and the three species of zebra are still found in parts of Africa.
Only one hundred years ago the last known wild Tarpan died. Attempts have been made to revive this interesting species of steppe horse by back-breeding, but the resulting horses, although very interesting, could never be regarded as authentic.

In 1883, another interesting member of the horse family became extinct when the last surviving Quagga died in Amsterdam Zoo. The Quagga was a large equid (horse-like animal) some 9ft in length and standing 54 inches at the shoulder. In appearance it resembled the front end of a zebra and the rear end of a horse! It lived only in South Africa on the open plains - but now it has gone forever.

The modern horse (Equus caballus).  The horse has served humans well over the centuries, so perhaps the time has now come for humans to do something in return by helping to preserve and protect the species that still survive in the world, so that future generations can have the pleasure and thrill of studying these wonderful creatures.