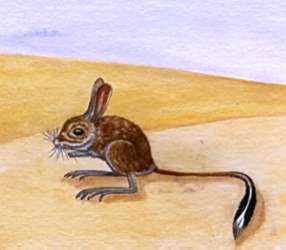 When on the move, jerboas look like mini kangaroos. They hop, normally a distance of 10 - 13cm at each stride. However, if a jerboa is threatened the hops can become more vigorous, covering up to 3m with each bound. This means that jerboas can reach speeds of up to 25km/h when they are chased by predators. They bound from side to side in a zig-zag pattern to help confuse their numerous enemies. Almost any predator in the desert will have a go at catching jerboas, especially foxes, owls and snakes.

Jerboas are mainly solitary animals, with each jerboa having its own burrow, although sometimes small colonies of separate burrows are formed. Breeding takes place twice a year, with litters being of 2 - 6, but usually three young. The babies are born naked and their hind legs do not develop until they are 8 weeks old. They cannot jump until they are 11 weeks old. Jerboas are sexually mature at 14 weeks, twice the age at which rats are mature. Also jerboas can live in the wild for up to 6 years, twice the life expectancy of rats.

Jerboas survive in the desert by burrowing. By living underground they can escape from the heat of the day in hot deserts and from the cold of the winter in cold deserts. Burrows are usually found near vegetation, but in the rainy season, burrows are dug in the sides of hills or mounds where they can escape from flood waters. During the hot summer in the African deserts, a plug of soil is placed in the entrance of the burrows to prevent the heat from getting in. Asiatic jerboas plug the entrances to their burrows in winter to keep out the cold. These winter burrows can be up to 3 metres deep.

Jerboas are swift diggers. They use their short forearms to scrape at the soil, then use their powerful hind legs to push the soil out behind them. Many species are specially adapted to living in sand, with special folds of skin than can be used to stop sand getting into their noses, and hairs in their ears which also prevent sand from getting in.

Jerboas feed on desert plants. Just after the rains, there are plenty of fresh green leaves, but as the plants dry up, these become more scarce, so the jerboas dig up the roots in which the plants store water and eat these instead. Some species also feed on beetles and other small insects. 95% of the long-eared jerboa's diet in Mongolia are insects, even those that fly as they can locate their prey's approach by using their sense of hearing.  The jerboa's bounding gait allows it to travel long distances in search of food with a minimum of energy loss.

Jerboas do not actually drink water. They get their water by extracting as much moisture as possible from their food. In the laboratory, jerboas have lived for up to three years on dry seeds alone. They eat moist leaves and shoots whenever possible, but can survive in dry periods by minimising their water loss. Their urine is very concentrated and highly acidic. During the hot summer months, some species go into a state of torpor and do not emerge from their burrows at all. For the rest of the year, hot desert - dwelling jerboas do most of their feeding at night when it is cooler. Cold desert - dwelling jerboas hibernate over the winter and live off their body fats.