This flamboyant fish is beautiful with it's frilly fins and hypnotic stripes but don't be fooled by it's looks - it is trying to tell you to stay away! 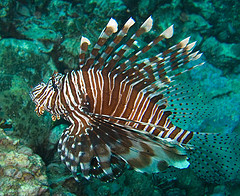 Distribution: Native to the tropical waters of the Indian Ocean, the western and central Pacific Ocean. Now being found in the Atlantic Ocean.

Food: Crabs, shrimp, mollusks, fish.  The Lionfish is notoriously unfussy when it comes to selecting it's dinner with some found with six species of prey in their bellies.

The lionfish is a beautiful and spectacular tropical fish with spiny venomous tentacles and long flowing fins. They are native to the south Pacific Ocean around Japan, Indonesia and Australia but over the last few years its population in the Atlantic has exploded and spread from Florida down to the Caribbean and even South America.

How did they begin their domination of a sea thousands of miles from their native waters?  It is believed that lionfish kept as pets in America are discarded in the sea when they become too big or are unwanted.  There is also suspicion that many escaped from an aquarium during a hurricane in Florida ten years ago.  But no matter how they got there it is clear that they are surviving well in their new home and this could do permanent damage to marine ecosystems and the biodiversity of coral and reefs.

The effects of the lionfish on the coral reefs are much the same as if we were to introduce thousands of lions into the English countryside - they would have no natural predators and would soon take over, eating everything from rabbits to deer.  A few years ago you could find one or two lionfish in their non-native waters, then there were hundreds and today, thousands.  Lionfish love to eat other fish and aren’t too fussy about what they eat, sometimes eating fish up to 2/3 their own size!  Some researchers have found up to sixty different species of fish in a lionfish’s belly.  The main problem is that there is nothing to eat the lionfish!  Except humans, that is.

Luckily for the affected coasts (but not so lucky for the lionfish!) lionfish are delicious and many countries and islands are organising hunting and catching sessions to try and reduce their populations.  Despite their beauty and delicious taste the concern over the impact of such a population explosion is very serious.  Female lionfish can produce 30,000 eggs every four days and without natural predators their numbers will only grow.

As they eat more and more, studies have shown that the population of native fish species drop dramatically which could have ever-lasting effects on the balance of established eco-systems and the health of the coral reefs.  This could in turn impact fishing and tourism industries, seriously damaging coastal societies and many people’s livelihoods.