There are 4 species of Manatee, one in West Africa, one in the Caribbean from the south-eastern United States to northern South America and one in the estuaries of the Orinoco and the Amazon. 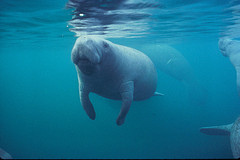 Length: up to 5m long

There are 4 species of Manatee; one in West Africa, one in the western tropical Atlantic, one in South America and one in the West Indies. 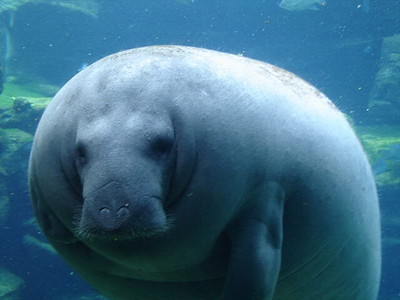 Manatees have split lips and hairy, creased faces. They are fish-shaped, and have hairless skin, with paddle-like forelimbs and horizontal tail which is broadly rounded and shovel-like, not divided into two lobes as in the dugong. They have mobile flippers which can be used as hands. The colour is dark grey to blackish. Their upper lips are divided and mobile. Manatees use their top and bottom lips together in order to grasp and tear at their food.

Manatees behave rather like underwater cows. They are relatively harmless for such large animals, and swim individually or in groups of 15-20 in the sea, coastal lagoons and rivers. They will investigate any strange objects, including boats, by swimming up to them and peering short-sightedly at them - their eyesight is not good. When not feeding they rest at the surface with only their arched backs showing or, in shallow waters, they may 'stand' with the tail bent under the hind end of the body, and with the head and shoulders out of water. They sometimes 'walk' in shallow waters using the tips of their flippers to push them along the bottom. Adults use their tails to swim, using their flippers to turn, but babies swim with their flippers. They can remain underwater for 16 minutes so long as they are inactive, but usually they surface every 5-10 minutes to take 2 or 3 breaths.

It is sometimes said that manatees gave rise to the stories of mermaids. The only basis for this is that Christopher Columbus noted in his journal, for January 1493, that when off the coast of Haiti he saw three mermaids that rose well out of the water. His opinion of them was that they were not as beautiful as they had been painted although to some extent their faces were quite human.

Later Columbus realized they were manatees, which he had probably met before on the coast of West Africa. They are reputed to be one of the worst-tasting sea creatures to have ever been eaten. Despite this, they were fed to slaves on plantations in the West Indies.

Although they are active all the time, manatees feed mostly at night on aquatic plants, but they will also pluck at leaves from ground plants which overhang the water. Their lips grip their food, and their bristles help push it into their mouths sometimes helped by their flippers. They will eat any vegetation their lips can pull apart.

Manatees are natural weedkillers, and have been used since 1885 in ornamental ponds at the Georgetown Botanic Gardens to keep them weed-free. In I960 there was hope that manatees might be used to clear the water hyacinth that was spreading in the tropics of Africa and America, choking waterways. This was not a complete success, however, as the manatees did not enjoy being transported very much.

Manatees have attracted human attention for at least 500 years, but we still know little about their way of life. Mating takes place in April and August. A dozen manatees come together and move as a herd into shallow water. There they pair off, making a great commotion in the water. The pairs then drag themselves half out of the water and embrace lying on their sides. After this they return to the water and play vigorously as a herd. The whole thing takes only about 15 minutes, after which the manatees split up and go their separate ways.

One, or sometimes two calves are born under water and immediately brought to the surface by the mother to take their first breath. The teats are near the mother's 'armpits', and people are confused as to how she suckles her calf. Some say the mother lies belly up, others that she lies belly down, with the calf at her side. Sometimes she clasps the baby to her with a flipper while she is vertical with her head and shoulders out of water, quite like a human mother. This might well be unusual behaviour, though. The young become mature at 2-3 years old, when they are about 8ft long. Although manatees in zoos have not survived for long, it is thought they may live for more than 50 years in the wild.

Manatees have few enemies other than alligators and humans and yet the South American, West Indian, and West African species are listed vulnerable by the IUCN. They have been killed for their flesh and hides by the local peoples for centuries but in the last decade or so have been protected by law in several places in tropical America, and at the beginning of 2020, Save The Manatee reported that there were only 371 manatees left.

Another threat to manatees today comes from the outboard motors of speedboats, as they tend to swim at propeller depth and cannot move quickly enough to get out of the way. Many serious injuries are caused by propellers.