The mole is not seen very often. The heaps of soil (molehills) which it makes whilst tunnelling gives its presence away. In medieval times it was called a moldewarp (earth thrower). 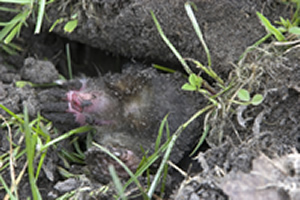 Distribution: Great Britain, except Ireland; throughout rest of Europe and Asia.

Size: Male:- head and body about 15cm (6ins). Female is slightly smaller. Tail about 32mm long. Weight:- about 120g and males are heavier than females.

The mole is not seen very often but it is one of our best known small mammals. The heaps of soil (molehills) which it makes whilst tunnelling gives its presence away. In medieval times it was called a moldewarp (earth thrower). The mole is closely related to the hedgehog and shrews.

Territory: Each mole has its own burrow system, a network of firm-walled tunnels. The tunnels are about 5cm wide, 4cm high and may be over 70 metres long; they vary in depth from just beneath the surface of the ground to about 70cm. When digging close to the surface, the moles push the displaced soil up vertical tunnels and these form the familiar molehills. The territories of several moles may overlap, but the residents avoid each other if they can, except in the breeding season. If two males meet, they may fight fiercely, which can result in death.

Daily Life: When tunnelling, a mole uses one front foot to push soil upwards into a molehill while it braces the other, and the hind feet, firmly against the tunnel walls. The long claws on the front feet help it to dig.

A mole can run backwards through tunnels and turn right round by doing a somersault! Its velvety fur lies backwards or forwards so that it does not become stuck against the tunnel walls when squeezing through them.

The eyes of the mole are very tiny but sight is not important to an animal that lives in darkness for most of the time. It does not have a good sense of smell or hearing but it is extremely sensitive to touch and can sense vibrations in the soil around it. Sensitive whiskers help it to find its way about and detect food and water; it is also helped by thousands of very sensitive, tiny hairs which cover its long nose.

Moles are sometimes seen above ground. They come to the surface to collect nesting material and to look for food when the soil is dry. Young moles come to the surface to look for new homes when they leave their mother's burrow. Moles emerge mainly at night but they are still vulnerable to predators; some mammals find them distasteful but many are eaten by tawny and barn owls.

Moles have long been regarded as a pest by many gardeners and farmers. Tunnelling near the surface may disturb the roots of garden plants and crops. Molehills are unsightly on lawns and are an inconvenience in fields to farm machinery.

However, moles are also useful. They eat many pests which are harmful to plant roots, such as leatherjackets, wireworms and cutworms. Their tunnelling helps to aerate the soil which is important to waterlogged areas.

In the past, country parishes used to employ a professional mole-catcher to trap and dig up moles. He would sell the skins to be used as fur trimmings or garments. Even 50 years ago a million or so moles were being trapped every year in Britain.

Moles breed from March to May only. The male (boar) visits the female (sow) in her burrow and leaves straight after mating, taking no part in raising the young. The female builds a special chamber about the size of a football and lines it with dry grass and leaves. An extra large molehill, or 'fortress', usually covers the nest chamber. A food store will be close by.

After a gestation period (time between mating and birth) of 30 days, a litter of 2-7 young is born. The babies are blind and naked at birth and do not grow fur until they are 2 weeks old. At about 3 weeks of age their eyes open. They grow quickly, feeding on their mother's milk, and are ready to leave the nest at about 35 days. They travel overland searching for territories of their own.

Moles are active by day and by night, almost continuously digging their tunnels and searching for food. They are active for about four hours at a time and then rest for a similar length of time. A mole will die of starvation if it does not eat every few hours.

It finds food by running along its tunnels and eating up any earthworms, beetle larvae, slugs etc, which have fallen from the walls. A mole probably eats at least half its own body weight a day. When earthworms are plentiful, during autumn and winter, the mole makes stores of them, biting off their heads and pushing them into the ground for eating later.