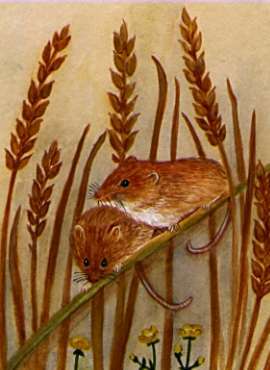 Daily Life: Harvest mice are active by day and night. Male mice roam over a territory of about 400 sq m, while females keep to a smaller area. They are very active, agile little animals, using their prehensile tail as a fifth limb to grasp grass stalks. The tail is wound around a stalk and in this way, the mouse can quickly climb the tall stems to find the seeds at the top. It breaks a seed off with its teeth, holds it with its front paws, removes the husk and gnaws into the centre.

What is eaten depends on what is available; in early spring, the mouse eats buds on bushes, new grass shoots and nectar from flowers. Seeds from crops are mainly eaten during the summer but insects such as wheatfly aphids, blackfly, grasshoppers, moths and caterpillars are also relished. Blackberries and rosehips are enjoyed in the autumn.

Harvest mice have many natural predators. They are a tasty snack for many animals including foxes, weasels, stoats, cats, owls, crows and kestrels - even toads will eat them!

Winter: When the cereal crops have been harvested in the late summer and most tall plant stems have died back, the harvest mice are left exposed and they look for shelter. In a severe winter they sometimes go into barns and outbuildings, but they usually find a nearby hedgerow. Here they build a winter nest of grass near ground level. They do not hibernate but sleep for long periods in their nest, waking up during milder spells to eat a little previously stored food or venture out on a foraging trip. They are more active during the day in winter. Many mice die of cold.

Threats to the Harvest Mouse

Humans have never deliberately persecuted harvest mice since their small appetites do little to affect crop yields. They even do the farmer a small favour by eating harmful pests such as aphids. However, they seem to be less numerous in cornfields than they used to be. This is most likely due to changing farming methods such as combine harvesting, reduced stubble length, stubble burning (though this is being phased out) and crop spraying.

Harvest mice must have shelter to retreat to once the crop has been harvested so hedgerows are an important habitat for them, providing food as well as shelter. When hayricks were more common, many mice over-wintered in these.

Although harvest mice may have decreased in some agricultural areas, there is evidence that they are widespread, even increasing, in other habitats, especially the undisturbed areas along motorway embankments.

The harvest mouse is not protected by law and it is possible it may become an endangered species in the future. It is important to conserve favoured habitats, particularly hedgerows.

Harvest mice are busy breeding from May to October, often producing 3 litters a year. A courting male chases a female who is often very aggressive and turns round to bite him! Eventually she usually relents, and when they have mated she chases him away.

The female now sets about preparing a nest ready for her babies which will be born after a gestation period (time between mating and birth) of 17-19 days. To make the intricate, tennis ball size nest, she balances 30-60cm up a stem and bends and weaves living, green leaves to form a framework. She splits lengthways more leaves, sometimes splitting one leaf as many as 15 times, and weaves these into the framework to form a spherical shape. She then lines the nest with chewed-up dead leaves. It takes her about 48 hours to complete the nest. After her 3-8 babies are born, she closes the entrance to the nest over with grasses.

The young are blind, naked and helpless to begin with - looking rather like little pink raisins! They grow very quickly, and by the eighth day they have grown grey-brown fur and opened their eyes. When they are 10 days old, the mother reduces their milk feed and supplements their diet with regurgitated seeds which she has chewed and swallowed. On the eleventh day they leave the nest and begin to explore, practising the skill of climbing grass stems. By 16 days of age they are completely independent. Their mother, who is usually pregnant again, abandons them, and looks for a new nesting site.

The young remain near the nest for a couple of days and then go off to search for territories of their own. Most baby harvest mice do not live for more than six weeks - eaten by one of their many predators.