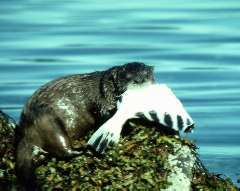 Otters breed throughout the year. The dog and bitch live separate lives, meeting only for mating. Usually there are two or more females living in a male's territory and when they are receptive, he will mate with all of them. They find each other by scent and by whistling. The two often playfully chase each other and pretend to fight.