At present there is still space enough on Earth for humans, wildlife and wild places, but can this be maintained? 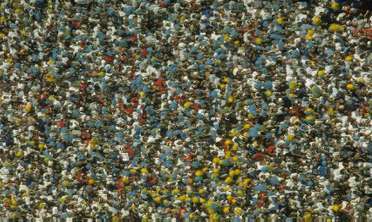 Once again, this seems vast until we take into account largely uninhabited regions such as the huge areas of the Arctic and Antarctic, the deserts and wetlands. These regions are not always totally uninhabited, but they can usually support only very small populations.

Our world cannot grow any larger, yet the human population keeps growing every year!  As of September 2020 there were 7.8 billion people on the planet.  More people need more resources such as water, food and land. Is it possible that there will come a time when there are not enough of these to go around?

The Increase in Population

You can watch the world's population count increasing in real time at: https://www.worldometers.info/world-population/

The Over Population Project, (2019), Solutions to overpopulation and what you can do, [online], Available from: https://overpopulation-project.com/solutions-to-overpopulation-and-what-you-can-do/  [Accessed on 23/1/21]

Why is Over Population a Problem?

Overpopulation of a species is the term used when the numbers of that species start to exceed the resources available to sustain them.  This can be caused by an increase in the number of babies being born and also by the population living longer lives.

Modern medical advances mean that people in developed countries are now living much longer lives than in the past. There are around 80 million births each year globally and, together with lower death rates, this means that the human population has been growing by another billion people roughly every 12 years. This increase is dramatically faster than it was even 100 years ago (see table in next section).

As the number of people increases, so does the demand for food, water and other resources. Techniques developed to farm food and produce items that people want to use, from clothes and cars to computers, mean that the Earth’s resources are rapidly being used up. The harmful emissions produced by factories and vehicles cause environmental damage, such as climate change.

In a particular place, over population can also be caused by an influx of people forced into the area due to war, famine or other disasters making their previous home uninhabitable. Climate Change is causing an increase in the number of hurricanes and floods and is likely to cause many more people to become displaced in the future.  Overcrowding leads to further demand for limited resources and this, in turn, can lead to more conflict and warfare.

As humans seek out more resources, they take over land that was once the habitat of other species leading to huge biodiversity loss. Present extinction rates may be as high as 140,000 species lost every year due to humans over fishing and taking over large areas of land (such as tropical rainforests) to use for farming food and fuel crops.

Sir David Attenborough has stated that the level of human population has a knock-on effect on all other environmental problems. In 2013, he called humanity "a plague on the Earth" and suggested that limiting population growth would be necessary to control it.

Is the Issue Really Over Consumption?

Although the figures in the previous table suggest that the world’s population will continue to rise at these rates, global population growth has actually been slowing since the 1960s. The number of people in the population remains high at the moment due to increased life expectancy, but if birthrates continue to slow, the population would eventually even out.

The United Nations (UN) publishes annual population trends and maps likely scenarios based on both high and low cases of fertility in a given year. It predicts that the population of the world will continue to increase until 2100, when it will peak at 11.2 billion people before declining.  If access to contraception services could be made available across the globe, the rate of growth might be slowed more quickly. However, there is also a risk that climate change could plunge currently developed countries into poverty, causing their birthrates to rise, as people have more children where there is a greater risk that some of them will not survive.

As it stands, in the early 2020s, the Earth would appear not to have enough resources to sustain 11.2 billion people. There are, however, some who point out that humans have, so far, managed to develop new ways to survive. The issue is that people cannot continue to consume as much as those in the richest countries do at present.  Although the UN estimates that there are around 850 million people globally who are starving or malnourished, households in the UK alone still waste 4.5 million tonnes of food a year. The average American uses over 300 litres of water a day which is over fifteen times more than someone living in a rural community in sub-Saharan Africa.

If it were possible to find more sustainable and equitable ways of growing and distributing food and other resources globally, some argue it would possible for the planet to cope with this number of people. However, as people consume more and more, this idea seems increasingly optimistic. People want to live in increasingly luxurious ways and if every person on the planet consumed as many resources as the average person in the US does at present, humanity would need five Earth’s worth of resources to support it.

What are Some Solutions to Over Population?

One of the most obvious ways to decrease population is for people to have fewer children. In countries where babies and young children are less likely to survive into adulthood, it is more common for families to have a larger number of children. It’s also more common for families to have more children in places where those children might be needed to help with work. However, more children also means more people to feed and care for.

Education typically leads people to have fewer children. Around 130 million girls and young women around the globe currently do not have access to education. Many are kept at home to work and are at risk of exploitation. Girls who are able to stay in school are less likely to marry and have children young. They are also likely to have fewer children overall.  Empowering women and girls so that they can choose what happens in their future is one of the most effective ways known for reducing unwanted pregnancies / birth rates?
It’s also important to consider the role of society and government in these matters. Some policies help provide access to education or family planning services, whilst others make it harder for people to access support. It’s also important for young people to be allowed access to education about pregnancy and contraception so that they can make informed choices as they get older.  Governments can also offer tax incentives to families who have fewer children and can fund health programs so that fewer children die in infancy, eventually leading people in developing countries to have fewer children. Some people choose not to use contraception due to religious or cultural pressures. Providing access to contraception to all those who would like it would make a dramatic dent in population numbers.

People also cause less harm if they are not overconsuming resources. Creating policies that benefit the environment and showing people that they need to waste less will help to protect the limited resources that we do still have.  The richest people on the planet are consuming far more than their fair share, causing huge imbalance in the resources available to all.