Like its larger relative, the Cormorant, the shag is a member of the pelican family. It spends more time on the coasts and out at sea than the Cormorant, rarely venturing inland. 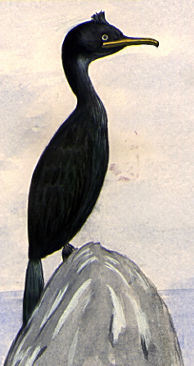 Distribution: around the coasts of Britain, mainly in the north & west. Also other European coasts, and Scandinavian coasts.

Like its larger relative, the Cormorant, the shag is a member of the pelican family. It spends more time on the coasts and out at sea than the Cormorant, rarely venturing inland.

Shags dive for fish from the surface of the sea. They swim gracefully underwater, helped by their webbed feet, in pursuit of fish. They feed in deeper water than cormorants and rarely catch fish which are sought after by human fishermen.

A shag can stay submerged for about a minute, and when it emerges from the water it often stands on a rock (rarely a man-made object) with its wings outstretched, as cormorants do. It is assumed that the wings are being held out to dry but it is strange that it has not evolved efficient waterproofing like other marine birds. The posture could help the bird to digest a large meal of fish, or serve as a signal to other shags.

Shags nest in small colonies in sheltered rocky ledges or sea caves, particularly at the bottom of seacliffs. The nest is made of sticks and seaweed, lined with grass. From one to six eggs may be laid and they are pale blue with a chalky white coating.

The eggs hatch after a month of incubation and the chicks have a thick coat of brown down. Both parents feed the youngsters whilst they remain on the nest for seven or eight weeks. Shags are fierce defenders of their nest and young and refuse to leave the nest if attacked, thrusting their sharp beaks forward and hissing loudly. This is usually enough to frighten away all but the most determined enemy!

Numbers of shags appear to have been increasing, especially on the east coast of Britain, since the 1920s. There are about four times as many shags as there are cormorants. This boom in population is probably due to a decrease in human's persecution (they used to be killed by fishermen) and climatic changes improving the food supply. Unfortunately since 2000 shag populations have been becreasing all over the UK. This could be caused by over fishing decreasing the Shags food sources.

On occasions local populations of shags are reduced as a result of a natural cause - a poison produced by tiny pinkish sea creatures (dinoflagellates); these creatures can be so numerous that they colour the water in a “red tide”.