The stoat is sometimes mistaken for its close relative, the weasel, but it is larger and has a distinctive black tip to its tail. 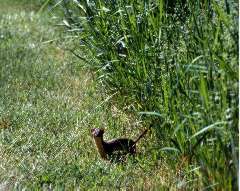 Distribution: widespread throughout the British Isles. Also throughout the rest of northern Europe, the tundra and temperate forest regions of Asia and North America. Not found in any Mediterranean regions.

Life-span: average one to one and a half years. Can live up to 7 years.

The stoat is sometimes mistaken for its close relative, the weasel, but it is larger and has a distinctive black tip to its tail, whereas the weasel's tail is all brown. Stoats in the northern part of their range, such as the tundra and North America, turn white in the winter, except for the tip of the tail, which stays black. This provides good camouflage against their snowy background. When they are white, stoats are called ermine.

The stoat is active by day or night but when it does rest, it does so in a hollow tree, a rock crevice, under a log or stone wall, or a burrow from one of its prey victims. Around the den, it holds a territory the size of which depends on the type of habitat and the abundance of prey. In Europe this is normally between 2,000 - 4,000 sq. m, but in Russia, a more barren type of habitat, it may be up to 10,000 sq m.

The alert, inquisitive stoat is one of the fiercest of predators. It can move fast, maybe up to 20 miles an hour, bounding over the ground. Almost any type of country habitat may be inhabited by stoats, but they usually prefer an area with good cover, and on farmland will keep to walls, hedges or fences where possible.

The stoat is a true carnivore, although it will eat birds' eggs, and feeds mainly on small mammals such as rabbits, hares, mice, voles and shrews - whatever is readily available in its territory. Birds are also eaten, and when other prey is scarce, it will even eat earthworms, large insects and carrion (dead animals).

The stoat's eyesight has a resolution below that of humans, though its night vision is better than ours.  A stoat tracks down its prey by scent, being able to locate a victim from a great distance. It follows a trail relentlessly, and once in pursuit, the prey has little chance of escape. The victim is killed by pouncing on it and biting deeply into the back of the neck near the base of the skull.

A stoat will often perform strange antics as part of its hunting strategy. It will approach a group of birds or rabbits and then jump around, pretending to ignore the animals who are attracted to this odd performance and edge nearer to get a better look! The stoat then suddenly pounces on the nearest member of its audience!

Lack of available prey is probably the main cause of death for young stoats for which mortality is high. Other predators include owls, hawks or larger carnivores such as the fox and particularly the domestic cat. There is little competition for food between stoats and weasels. The stoat is much more aggressive and can handle larger prey, but the weasel is an excellent 'tunnel-hunter', reaching small rodents which the stoat cannot.

Stoats are solitary animals and only socialise with each other in the breeding season. Mating occurs in mid-August, but the fertilised eggs within the female do not begin developing until up to 10 months later, so that the female does not give birth until the following spring. This is called delayed implantation.

Six or more, sometimes up to twelve, babies (kittens) are born in a hidden nest, often in an old rabbit burrow, lined with fur. At birth, the kittens are blind and covered in fine white hair, with a thicker patch of fur on the back of the neck to enable the mother to carry them safely in her mouth. Their eyes do not open until they are at least a month old. They are weaned at about 5 weeks and at 6 weeks old the black tip appears on their tail. After the young have left the den, the family stays together for some time, hunting and playing together. The mother defends her family fiercely.

The beautiful white coat of the stoat in winter, the ermine, has always been prized by humans. It is the traditional trimming to the robes worn by royalty. 50,000 ermine pelts were sent from Canada to England for King George VI's coronation in 1937! They were once trapped in large numbers in the Arctic, Russia and North America but, fortunately for the stoat, in recent times the price of labour to process such tiny pelts has not made hunting worthwhile.

In Britain, stoats have been ruthlessly trapped by gamekeepers who accused them of stealing game birds - despite the fact that their main prey is rabbits and mice. Nowadays, this persecution has been much reduced and stoats have soon recovered in numbers. Populations of stoats vary according to the number of prey. When rabbits were affected by the disease myxomatosis in the 1950s, almost all of them were wiped out, and in the areas where stoats depended heavily on rabbits, their numbers declined drastically. But stoats eat many other things, so they managed to survive in most areas. At the moment they are still quite common throughout Britain.