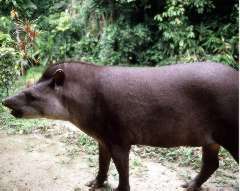 The Malayan tapir (Tapirus indicus) lives in densely forested areas of south-east Asia, from Burma to Malaysia and Sumatra. It differs from the South American species in its greyish black and white body markings. Seen in a zoo, this tapir's colouring might seem to be rather conspicuous, but in its natural surroundings deep in a humid jungle, the black and white markings help the animal to blend perfectly with its moonlight dappled background. This species spends much of its time in the water and it is an excellent swimmer.

The smallest of the tapirs is the thick-coated Mountain or Woolly tapir (Tapirus pinchaque), which lives in the Andes of Colombia, Peru and Ecuador at altitudes of up to 12,000 ft. They occur in isolated regions of the Andes and their numbers are becoming smaller day by day. Unfortunately, this species has suffered as a result of heavy exploitation of its habitat by humans. It has also been hunted either as a source of food or by those who capture live animals for export to zoos.

The Brazilian or South American tapir (Tapirus terrestris) is nearly always found close to water as, like other tapirs, it is a good swimmer. This blackish-brown species is also fast and sure-footed on land, however, even over the roughest terrain. It is a low land species and lives in marshy forests in parts of Columbia and Venezuela and southward to Brazil and Paraguay. It is the most common of the American tapirs, although it too is suffering from the exploitation of its natural habitat by humans.

The Central American or Baird's tapir (Tapirus bairdii) is the largest of the three American species and is found throughout Central America from southern Mexico to Columbia, and in parts of Ecuador west of the Andes.

Tapirs have no fixed breeding season. After a gestation period of about 390 days, a single baby is born (twins are rare). The baby can follow its mother within minutes of being born and all new-born tapirs have a reddish-brown coat dappled with white spots and stripes. This pattern helps to provide the young one with excellent camouflage. Whenever there is danger lurking nearby, the baby 'freezes' and becomes part of its background. These coat markings last until the baby is about six months old, and then fade as the young tapir grows its adult coat. The youngster will remain with its mother for up to twelve months and then goes off on its own.

Tapirs have always been a source of food for the natives of the forest, but over-hunting by outsiders has drastically reduced their numbers in some areas. Probably the tapir's most serious problem is the ever-increasing destruction of its forest habitat. Three species of tapir have declined over recent years and are classed as Endangered on the IUCN Red List - the Malayan, the Mountain and the Baird's. The Lowland tapir is classified as Vulnerable.

These strange but appealing animals need full protection if they are going to survive in the wild. Efforts are being made to give them that protection, by creating forest reserves - but nobody can be certain that action has been taken in time to save the tapir, and its forest habitat, from extinction.