The Siberian tiger is a very rare species of tiger. From an estimated low in 2010 of 360, in May 2015 the Russian
Government announced that the Siberian (or Amur) Tiger has increased in numbers to between 480 and 540. 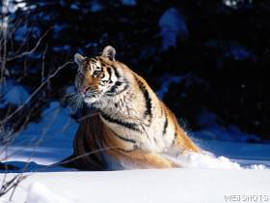 Numbers: In May 2015 the Russian Government announced that
the Siberian (or Amur) Tiger has increased in numbers to between
480 and 540.

Distribution & habitat: Around 80% of Siberian tigers live within the coniferous, scrub oak and birch woodlands of the Primorski Krai region of Russia (eastern Russia), with low numbers also being found in northeast China and northern North Korea.

Size: They are the largest of all cats with males growing up to 3.3 metres long and weighing up to 300 kilograms. The smaller females measure around 2.6 metres and weigh between 100-167 kilograms.

Life span: They can live up to the age of 25 years in their natural habitat.

The Siberian Tiger's favourite foods include elk, deer, wild boar, lynx and bear; wild boar makes up more than half of its diet. They will also eat fish, rabbits and small rodents when larger prey are scarce.

An adult needs to eat around 9 kg of food a day to survive within the cold climate. They can, however, eat up to 50kg of meat in just one meal, that’s around 400 burgers!! Their territories can be as great as 1,000 square kilometres; they need to cover such vast areas whilst hunting in order to find their prey.

Tigers can run very fast reaching speeds of up to 50 mph, however, they can only maintain this speed over short distances. In fact only one out of ten of their hunts will actually be successful. They hunt mainly at night time; their excellent night vision and highly developed senses of hearing and smell allow this. Their night vision is six times better than that of human’s.

The Siberian tiger’s mating season tends to be from December to January. The normal gestation period is three to three and a half months.

An average litter size is three or four cubs. The cubs are born blind and are around the size of a house cat. After about two weeks their eyes start to open and their teeth begin to grow. They are weaned at six months and independent by 18 months. They will start hunting on their own within their first year, however, they do not leave their mother and establish their own territories until they reach three to five years old. Unfortunately it is usual for only one cub from each litter to survive to maturity.

Threats to the Siberian Tiger

Forest fragmentation and poaching have both taken their toll on tiger numbers, however, in Korea logging of Korean Pines seems to pose the greatest threat. Korean pines produce a good quality wood which is used mainly for pencil production. The pine is critical to the survival of the tiger population because its nuts are a vital food source to elk, deer and boar – the tiger’s main prey. The survival of the Siberian tiger is largely dependent on the protection of the Korean Pine. Russian law now protects the tree yet in many areas there are very few trees left remaining. Much work is needed to restore the forest ecosystem back to health.

Although it is illegal to kill a tiger, tigers are still poached today because their body parts can be sold on the black market for great sums of money. The tiger parts are sold for their fur and use in traditional Chinese medicines. They are also hunted as trophies.

The Siberian Tiger's territory can be as great as 1,000 square kilometres; they need to cover such vast areas whilst hunting in order to find their prey.

The Siberian tiger’s orange colour is actually paler than that of other tigers and it has widely spaced brown stripes rather than black. It has a white chest and belly and a thick ‘ruff’ of hair around its neck.

Adaptations to environment: Its thicker fur, and the layer of fat along its belly and flanks, allow it to live within the cold, harsh Siberian temperatures which can reach as low as - 46°C.

A tiger’s stripes act as camouflage within long grass and dense vegetation as they help distort its body outline, however, as the land here is covered in snow for most of the year the Siberian Tiger has developed stripes much paler than that of other tiger subspecies.