Green Turtles are found in all the warmer oceans and in the Mediterranean. They have thick, heavy, bony shells, covered in plate-like scales. 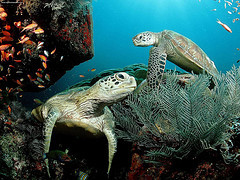 Description: thick, heavy, bony shell, covered in plate-like scales. Adults are olive or dark brown in colour, with yellow spots. Its flesh is green, and its is this which gives it its name.

Size: length up to 1.5m. Weight up to 185kg. There are seven species of sea turtle, the largest being the leatherback which grows to over 2 metres long.

Baby green turtles (hatchlings) have a more varied diet, and eat small fish, crustaceans and jellyfish as well as algae. During their first few months, the young are poor swimmers, so they tend to float around the oceans on beds of sargassum weed. These floating rafts are teeming with tiny crabs and shrimps which provide the baby turtles with a ready supply of food.

As they grow, the turtles turn increasingly to a vegetarian way of life. They use their excellent underwater eyesight to locate possible supplies of food.

Mating takes place on the water's surface. A few nights later, the female hauls herself up the beach and digs a large hole with her front flippers. She lays about 100 hard-shelled eggs into the hole, each about the size of a table-tennis ball. Then she pushes the sand back into the hole to cover the eggs and returns to the sea - the whole process having taken several hours.

Over the next few weeks, the female will lay several batches of eggs. These hatch 2-3 months later during the hours of darkness and the tiny baby turtles dig their way to the surface. Then they scamper down to the sea, apparently guided by the light of the moon on the waves.

Out of the 100 eggs laid, only about one or two hatchlings will survive their first year. The sex of hatchlings is determined by their incubation temperature. At 32 °C the sex is 1:1, and at 28°C all the hatchlings will be male.

Turtles migrate to the same beaches time and time again to lay their eggs. Often they return to the same beach where they were hatched themselves. Sometimes the migration may involve travelling great distances - many of the turtles feeding along the Brazilian coast, for example, swim a distance of 4500km against the current to the tiny Ascension Island (which is only 17km wide), and is sited in the mid-Atlantic.

The turtles go to these lengths in order to protect their eggs. On the Brazilian mainland there are many animals that would dig up the eggs for food. On Ascension Island, however, the only predators are the frigate birds that take some of the hatchlings. Both male and female make the long voyage to their nesting beaches, generally every other year.

Although it is illegal to hunt green turtles, they are still killed for their flesh and for their shells, which are used for jewellery and ornaments. This black-market trade has caused the green turtle to become an endangered species.

The WWF are aiming to reduce the accidental catching of turtles along with fish, by working with fisheries to switch to more turtle-friendly fishing hooks (“circle” hooks) and other devices that stop turtles from getting caught in nets. They run an international competition called Smart Gear to encourage creative new ways to solve these problems.  Winning devices have been designed to prevent turtles getting caught on tuna longlines and to help turtles avoid gillnets. The WWF also works with fishermen to help them save turtles caught in fishing gear.