What are the experiments for?

Some reasons for animal experiments include: 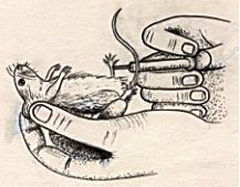 What are some possible alternatives to vivisection?

Understanding Animal Research claims that most of the accusations made against vivisection are inaccurate, and that animal testing produces valuable information about how new drugs react inside a living body. Tests are carried out to identify major undesirable effects such as liver damage, raised blood pressure, nerve damage or damage to a foetus. Drugs can be altered by digestion, and become either less effective or more toxic, and Understanding Animal Research argues that such problems cannot be investigated using cell samples in test tubes.

The Medical Research Council states that it “considers the use of animals to be necessary in many areas of biomedical research in order to better understand the living body and what goes wrong in disease.” It claims that  “animal research is essential in the development of safe and effective ways of preventing or treating diseases.”

Anti vivisection campaigners argue that in vitro (test tube) experiments are at least as accurate and often more accurate than animal tests.  In these tests, experiments are carried out on cells rather than living animals. They do, however, still require cells to be taken from somewhere. This can be from humans, but is also often still from other animals. Another approach is to use computer modelling where the results from previous animal experiments are used so that computer algorithms can calculate the most likely outcome in a new test.

As people develop new methods of scientific study, it seems likely that they will be able to move further away from the animal tests of old. Until that time, there are groups involved with trying to improve the way that animals used for experiments are treated.

The RSPCA is one of a number of animal rights groups campaigning to ensure that the “3 Rs” are met in terms of animal testing. The 3 Rs were first defined in 1959 and are: Replacement (replacing animals tests with other experiments wherever possible), Refinement (changing the tests to cause less suffering to the animals) and Reduction (reducing the number of animals that the tests are carried out on). The UK National Centre for the Replacement, Refinement and Reduction in Animals in Research (NC3Rs) is an independent scientific organisation whose job it is to find ways to reduce the need for animal testing and to improve the welfare conditions of any animals used for research.

Animal Justice Project, (2021), Vivisection: why it can never be right, (online), Available from: https://animaljusticeproject.com/vivisection/ [Accessed on 23/1/21]

National Anti-Vivisection Society, (2021), The History of Vivisection, (online), Available from: https://www.navs.org/additional-information/the-history-of-vivisection/#.YA1b4C2cZ-V [Accessed on 23/1/21]

What medical benefits has vivisection provided?

In 1889, two scientists, Joseph von Mering and Oskar Minkowski, showed that removing a dog’s pancreas gave the animal diabetes. This was the first time that anyone had realised the pancreas was an important organ in terms of helping digest sugars. In 1921, two Canadian scientists, Frederick Banting and Charles Best attempted to produce insulin and showed that giving insulin to a dog that had had its pancreas removed helped lower its blood sugar. Before long, James Collip, a biochemist, had extracted insulin from beef pancreas which was pure enough to be able to treat diabetic patients. He needed to find out what concentration of insulin to use, and used rabbits to carry out his tests. His extracts were used successfully in dogs and humans in 1922. The results were described by the British Medical Journal as "a magnificent contribution to the treatment of diabetes". In Britain today, there are  hundreds of thousands of diabetics who have to inject insulin and worldwide there could be more than 200 million. Insulin injections developed through animal testing continue to save millions of lives.

Animal experiments have also been key to the development of vaccines. Before the smallpox vaccine was developed from animal tests, the disease had been around for 12,000 years and had killed between 300 and 500 million people during the twentieth century alone. Smallpox was finally wiped out in 1980.  The polio vaccination, which was introduced in the 1950s, also saved millions of lives. It was developed after nearly 40 years of research on a range of animals from mice to monkeys. In 2021, people are beginning to be vaccinated against Covid-19, the coronavirus which has caused a pandemic, meaning that people have had to be locked down in their homes to keep each other safe. Each of the vaccinations used has been tested on animals and at least one of the vaccinations uses an adenovirus from chimpanzees to make it work.

Treatments for other human diseases are sometimes discovered by making animals ill on purpose and then studying the way that the disease progresses, compared with the way it does in people. All mammals, says Understanding Animal Research, have the same organs as humans, performing the same functions and controlled by the same mechanisms. It claims that studying the differences between animals and humans could lead to exciting new developments. For example, a mouse with muscular dystrophy suffers less muscle wasting than a human patient. If we could find out why, we could discover a treatment for the disorder.

Why is Vivisection Used?

Experimenting on animals first began as a way for surgeons to practise operations without carrying them out on humans.  As surgeons realised that they needed to learn more about the ways that bodies worked, they started to carry out experiments on people. This raised lots of ethical questions about which tests could be done and on whom. For example, historically people have sometimes believed that it is acceptable to experiment on prisoners.  Carrying out experiments on animals solved some of these moral problems, but created new dilemmas.

Animal experiments are often performed to highlight any potentially harmful effects of newly-developed medicines and chemical substances on humans. In some cases, researchers try to mimic conditions affecting humans (e.g. cancer, cystic fibrosis, arthritis, etc.) in the animals they are experimenting on, to see if new medicines will be effective in treating them. Understanding Animal Research (a pro-vivisection organisation, previously known as The Research Defence Society) claims that inherited diseases such as cystic fibrosis are now being accurately reproduced in specially bred genetically altered laboratory mice.

Animals are also used to test new cosmetic ingredients, posing the question of whether we should put animals in harm’s way simply so that we can look good.

Some of the most controversial animal experiments are tests like the Draize eye test,  in which a substance is dripped into the open eye of an animal (usually a rabbit) and any reactions are observed. The LD100 test (Lethal Dose 100%) uses 60 to 100 animals, and determines how much of a chemical or medicine the animals need to ingest before they all die. The LD50 test is similar, except that the dose needed to kill half of the animals is determined. This then assisted in deciding a safe dosage level for humans. The LD50 test is now banned in the UK.

In the United Kingdom, any experiment involving vivisection must be licensed by the Home Secretary.