Warthogs are mostly found in central, eastern and southern Africa. Both sexes have the prominent tusks and two warts on either side of the face. 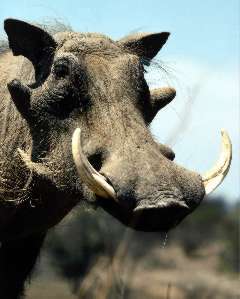 Distribution: central, eastern and southern Africa, south of the Sahara, and even the Sahel - a very dry region of the Sahara.

Life-span: unknown in the wild. 12 years in captivity.

Warthogs live in small family groups called sounders. These consist of a male and female, along with one or more generations of their offspring. Sometimes sounders group together into larger groups, though each sounder keeps its identity. Older males often live alone.

Warthogs keep themselves covered in mud to help keep cool. They have no sweat glands, so this is very necessary. They tend to live near muddy water holes, so they can wallow in the mud to keep cool in the heat of the day, and have a good supply of water to drink. However, warthogs can be found in the very dry Sahel region, just south of the Sahara desert.

Warthogs have dens, which they make under rocks or in burrows, but they tend to sleep and breed in abandoned aardvark dens. These consist of a tunnel leading to a large underground chamber which is ideal for sheltering in and for rearing young. When a warthog family goes into its den, the young enter head-first. One adult always stays outside until the young are safely in the burrow, then shuffles backwards into the burrow's entrance, so that its tusks are always facing any potential predators.

They are formidable opponents, as they are very fierce and highly protective of their offspring. They can run at speeds of up to 50km/h, and their tusks are capable of ripping open even a lion's belly. They have poor eyesight, but excellent senses of smell and hearing, so they are unlikely to be taken by surprise.

Male warthogs sometimes fight each other, charging at one another with manes bristling and lowering their heads to butt each other. They growl and push their opponent to try to make their opponent overbalance. Most fights are just a challenge of strength, but sometimes they inflict terrible injuries on one another.

The beginning of the mating season coincides with the beginning of the rainy season. When the female is in heat, the male follows her everywhere, circling her and making peculiar grunting noises until she is ready to mate. When the female becomes pregnant, she leaves her family and makes a den in an area where there are no warthogs. She gives birth usually to 2-4 young, although litters of up to 7 have been recorded. As the warthog only has four teats, she has a difficult time if she has to try to feed more than four young.

The young are greyish-pink in colour, and are very sensitive to the cold, so they huddle together for the first few days after birth. The mother leaves the den to feed but returns to suckle the young at midday and dusk. After a week, the young make their first short trips outside the den, and are eventually able to forage on their own, returning to the burrow at night.