Wolves are the largest wild members of the dog family. They live in packs and have to co-operate in order to survive. The Arctic Wolf is a highly resilient animal which inhabits some of the most hostile terrain on earth. 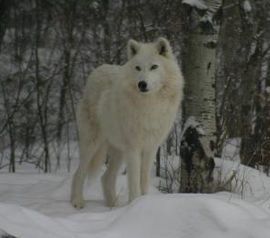 Wolves are the largest wild members of the dog family. They live in packs and have to co-operate in order to survive. For example, a fully-grown musk ox or caribou would be far too large for any single wolf to tackle. A herd of musk oxen will automatically form a defensive circle with their calves in the middle if they sense the approach of wolves. Musk oxen have large horns and because of their size have a great weight advantage over the wolves. Therefore the wolves rely on teamwork. They prowl round the herd, hoping to panic them. Very often the wolves will be unsuccessful. Only around one in ten of these attacks will result in a kill. If the musk oxen do panic, the wolves immediately try to isolate a young or weak animal. If one wolf latches on to a victim, the others will rush to its aid until their combined weight brings it down. Wolves can go without food for several days, but when they do succeed, can eat up to 45kg of meat at one sitting.

Packs are made up of a breeding pair, their cubs and their unmated offspring. The breeding male, known as the alpha male is dominant over the pack with his mate (the alpha female) as a near equal. They are treated with respect by other members of the pack. Lesser wolves will always hold their tails at a lesser angle than the dominant male. Dominant animals will also make their inferiors cringe or lie on their backs to show respect. Juvenile wolves are at the bottom end of the pecking order, but as they get older, their status increases, whilst weakness caused by old age demotes previously dominant animals.

The wolf's only real enemy is humans. The reason for their mass extermination in some areas was their discovery that sheep and cattle made good eating and were considerably easier prey than musk oxen. Understandably American farmers objected to the killing of their stock by the wolf, which was then systematically destroyed over most of its range.

Wolves are not the lone, dangerous, vicious creatures they are often portrayed as. They are simply large wild dogs doing what they have to do to survive. Experienced wolf watchers describe the wolf's outstanding characteristic as 'friendliness' They constantly demonstrate their affection for each other with licking, tail-wagging,nose licking and other gestures, some of which have been described above. This 'friendliness' is essential for a hunter who depends on teamwork and co-operation.

Also known as the polar wolf or white wolf, the arctic wolf is a highly resilient animal. It has to be, as it inhabits some of the most hostile terrain on earth. The air temperature in its hunting grounds does not rise above -30°C in April, and this combines with wind chill to cause temperatures of -100°C or less. The ground is rarely unfrozen, and when a thaw occurs, it affects only the top few centimetres of soil. As the soil is poor, food for herbivores is also limited, and as the winter comes, the wolf's prey, large grazers such as musk ox and caribou are driven south to seek out better food. The wolves follow their prey south, returning to the north the following spring.

The Arctic wolf has several adaptations, which allow it to survive in the icy territory it calls home. For example, they have furry paws for warmth and to provide a better grip on ice. Their paws also have a heat exchanging mechanism so they remain cooler than the rest of the body and blood that enters the paws is used to heat up blood that is leaving them, so that the wolf can maintain a stable body temperature. This is the same mechanism used by water birds such as penguins and ducks.

As is typical in packs of wolves, only the alpha male and beta female mate. This ensures that there are not too many pups born each year, so that there is still enough food to go round.

If the icy ground is not too hard, arctic wolves may dig a den in which to give birth. Often, though, the ground is frozen solid, so they make use of caves, or the dens left by other wolves, instead.

Up to 12 pups may be born in one litter, though the average is 4 to 7. The young are born blind and defenceless after a pregnancy of around 63 days. Pups stay with their mother for the first 10 months, after which they are able to hunt on their own. After this, the young wolves might stay with the pack, or they may head off to seek or form a pack of their own.