Australia is the sixth largest country in the world and is an island continent that lies in the southern hemisphere.

About 70% of Australia is unable to support agriculture, and at least one third of this area is desert, with the remainder being dry shrub land (or bushland). Only about 15% of the land mass falls within the temperate zone (mostly in the southeast) and some of the remainder is tropical rainforest (mostly in the Northern Hemisphere).

About 50 million years ago it was joined to a giant landmass called Gondwanaland but it then became separated and it is its isolation that has led to its unique wildlife. There are lots of creatures and plants that live on the Australian continent that can’t be found anywhere else! In fact Australia, New Zealand, Tazmania and the surrounding islands are the only places in the world where you can find the group of animals called marsupials (those that have a pouch for carrying the immature young). 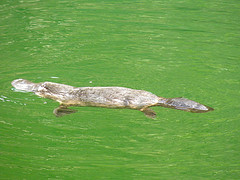 The platypus of Australia is the only survivor of an original species which lived 110 million years ago. Four species related to the platypus have been found in fossil deposits in Australia.

What foods do platypus eat?

The platypus body is about 36cms long, and has a tail roughly 13cms in length. They are covered in a soft, dense layer of fur that varies in colour from yellowish to dark brown.

The male is slightly larger than the female and has hollow spurs connected to venom glands on the ankle of each hind leg. The poison, although not fatal to humans, can be quite painful. The male uses these spurs in competitive mating fights and to protect their territory.

Platypus can only be found in the river systems of eastern Australia.

Why do platypus live in and around rivers?

Although it’s bizarre to look at, the platypus is perfectly adapted to its semi-aquatic life in lakes and streams. It is an excellent swimmer and diver and is able to stay submerged for up to five minutes. It forages at night and rests during the day in burrows dug out of nearby banks.

Its only enemies are large fish and perhaps, snakes.

Imagine how platypus might look in a million years as it keeps evolving!

The Australian Dingo is a type of dog. They are thought to have originated in Asia, are evolved from a subspecies of the Grey Wolf.

It seems likely that seafarers transported Dingos from mainland Asia to Australia and other parts of the Pacific during their voyages.

Fossil evidence suggests that Dingos arrived in Australia around 3500 – 4000 years ago, and quickly spread to all parts of the Australian mainland and offshore islands, with the exception of Tasmania.

It is thought that the Dingo caused the fall in numbers of the Thylacine – a type of marsupial – either through competition for food or through the introduction of diseases such as rabies.

In Tasmania there were no Dingos, and the Thylacines survived until the 1930s further proving that Dingos were a major cause of the decline of Thylacines on the mainland.

Funnel-web spiders are found in eastern Australia, Tasmania and as far west as the Gulf Ranges.

At least 40 species of funnel web spiders have been identified.

The most characteristic sign of a Funnel-web’s burrow is the irregular silk trip-lines that radiate out from the burrow entrance of most species. These trip lines alert the spider to possible prey, mates or danger.

Most funnel-web spiders are nocturnal – that is active at night.

Funnel-web spiders are large, about 1.5 – 4.5 cm body length, with a glossy dark brown to black carapace. The abdomen is usually dark plum to black and not patterned.

Female funnel-web spiders spend most of their life in their burrows.

The males leave their burrows in search of females in summer and autumn, which is when they often come into contact with humans.

The female spins a pillow-shaped silk egg sac, into which she lays over 100 eggs. She cleans and turns the egg sac several times during incubation and will defend it vigorously if disturbed. The spiderlings hatch about three weeks later, and stay with the mother for a few months. After two moults, they leave the burrow to make their own burrows.

When juvenile males leave the burrow they become wanderers.

Funnel-webs mature in about two to four years, with the females living to ten or more years, and the males dying about six to nine months after maturity.

The spider’s famous bite is dangerous and can cause serious illness or death. The venom appears to particularly affect humans, whereas other mammals – such as cats and dogs – are relatively resistant.

The male Sydney Funnel-web Spider is more dangerous than the female, because it carries the toxic venom that attacks the human nervous system so severely. 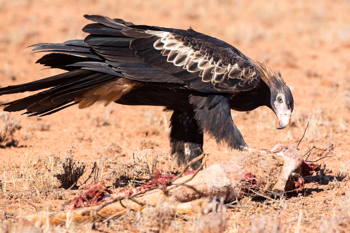 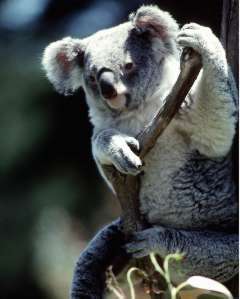