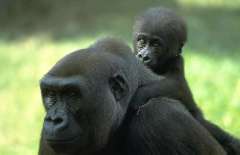 Most of the gorilla's day is devoted to eating and an adult can quite easily consume about 30kg of vegetation every day. Scientists studying the gorilla in the wild have listed more than 200 different food plants eaten, although the family groups may travel no more than two or three miles in a day. Most of the plants eaten form the forest's undergrowth - very little of the food comes from the trees themselves.

A gorilla rarely drinks since it gets most of the water it needs from its diet, together with morning dew on the leaves. When it does drink, a gorilla soaks the fur on the back of its hand and sucks the water from it.

Another important part of the gorilla's day is social grooming. One gorilla 'presents' itself to a companion which uses its fingers and teeth to comb through the other gorilla's hair. This grooming can relax a gorilla so much that it appears to go into a trance!

Every evening, a gorilla builds itself a nest for sleeping. A young gorilla shares its mother's nest up to about the age of three but it may practise building its own nest from an early age. Nest-building doesn't take long; the gorilla just sits on a main branch and bends in smaller branches to form a small platform. Large males usually make a nest on the ground.

A Frightening Display! When disturbed in some way, gorillas of both sexes and all ages over a year, beat their chests. This seems to help them to relieve tension, but in the adult male it is part of a much more elaborate display. If a strange male appears in a group, the resident male will start to hoot, becoming louder as he grows more excited. He then stands to his full height, beating his chest with the palms of his hands, and maybe moving towards the stranger, growling and gnashing his teeth. If this does not frighten the stranger away then he will charge, screaming with rage and tossing vegetation into the air. The charge is usually a bluff, and the 'silverback' does not physically attack the intruder, but stops right in front of him glowering until one of them turns away - usually the stranger.

There is no special breeding season and gorillas may mate at any time of the year. It is not always the lead male in a group who mates with the females in his group; sometimes a wandering male who has joined a group for a while mates with a female in it. He may take a female with him when he leaves, to form a new group.

A female is ready to breed when she is 6 - 7 years old and she usually has a baby about every four years. Infant mortality is quite high and about 40 - 50 per cent of the young die in infancy. Therefore, a female probably produces a baby more frequently than once every four years.

Gestation (the time between conception and birth) is 251 - 295 days, a little shorter than in the human. The baby gorilla weighs about 1.98kg, just about half the normal weight of a human baby at birth. However, the baby gorilla develops twice as fast, crawling in 9 weeks and walking upright for a few steps at 35 - 40 weeks. Most babies are weaned after 8 months but some continue to suckle for up to 20 months. Gorilla parents protect their offspring at all times, so the young apes are able to spend their 'childhood' eating, sleeping and playing.

A youngster stays with its mother for about three years. Females stay in the group but males wander off to live a mainly solitary life, becoming sexually mature at 8 - 9 years, but they do not reach full size until they are 12 - 14 years old.

There was a time, prior to 1847, when the gorilla was the 'yeti' of Central Africa. It was dismissed as a "silly native legend".

Following the 1933 film King Kong, the killing of gorillas for sport increased considerably. Some native tribes eat gorilla meat, and, although protected by law, poachers are a problem, selling the skins, hands and heads to tourists.

There are approximately 880 mountain gorillas existing in the wild. Major efforts by various conservation organisations to save this gorilla in its natural habitat began in 1978 and the Mountain Gorilla Project was developed. Initially all efforts were concentrated in the Parc National des Volcans in the Virunga mountains of Rwanda.

Within about ten years, much of the killing and live capture of mountain gorillas had stopped and controlled tourism had turned the gorilla into an economic asset for Rwanda. In 1991, the conservation efforts were increased to include all gorillas and their forests throughout Rwanda, Zaire and Uganda - the Project's name changed to the International Gorilla Conservation Programme (IGCP).

In April 1994, a civil war broke out in Rwanda, bringing violence, chaos and much suffering to the whole region. By September of that year the future of the mountain gorilla and its habitat, the Virunga mountains ecosystem, was in great jeopardy. Most of the wardens and rangers of the Parc National des Volcans had fled across the border to Zaire, leaving the park without protection. In Zaire, the Parc National des Virungas was inundated with hundreds of thousands of Rwandan refugees, who set up camp there, devastating the environment.

Since that time, the situation has become more stable and several rangers and guides have returned from Zaire to the Parc National des Volcans. Fortunately, the mountain gorillas at least, in both Zaire and Rwanda, have not been too disturbed, mainly because the higher altitude forest areas in which they live, have been largely untouched.

The situation in Uganda, home to around half of the total population of mountain gorillas is much better. There, much of the income for the parks comes from tourists who pay to view gorillas, and the IGCP, working in conjunction with the Ugandan National Parks, has been aiming to ensure that this income benefits local communities.

In 2015 reports suggest that over a third of the gorilla and chimpanzee populations has been wiped out by the deadly ebola virus since 1990. From 2002 to 2003, an estimated 5,500 endangered western gorillas were killed by Ebola virus at the Lossi Sanctuary in the Republic of Congo.

Mountain and eastern lowland gorillas are entirely vegetarian, eating leaves, stems and fruit of plants such as bamboo. Western lowland gorillas also eat insects and small invertebrates. Largest of the four great apes (the chimpanzees and orang-utan being the other two), the gorilla is a shy, gentle, peaceful animal, quite unlike the savage creature depicted in some stories and films of the past.