'Orang' and 'utan' are the Malay words meaning 'person' and 'forest'; the orangutan is literally a 'person of the forest'. 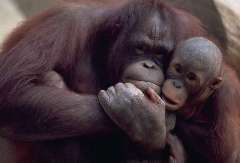 Distribution: restricted to the islands of Borneo, Malaysia and Sumatra, Indonesia.

Life-span: estimated average of 35 years. 50 years or more in captivity.

Territory: Unlike gorillas, common chimpanzees and bonobos, which live in large social groups, orangutans lead a mainly solitary life. The males constantly move from one area of forest to another. The dominant male ranges over a particular area for several months mating with any receptive females he comes across. When all the females have been mated, he moves on to another area. The adult male advertises his presence to females and other males by making a long, booming call. Adult females spend very little time with other orangutans, but may occasionally travel together or feed in the same tree - although they don't usually take much notice of each other! Young orangutans which have left their mother may move around in groups of two or three.

Daily life: The orangutan is diurnal - that is, active during daylight hours. It lives high above the ground in the forest canopy, moving slowly and carefully through the trees, using all four limbs. The hands and feet are hook-shaped, designed for grasping branches and its powerful arms allow it to swing and climb easily. Because of its tree-top lifestyle, the orangutan has developed arms longer and stronger than any other ape. Bornean orangutans may go down to the ground for brief periods each day, but in Sumatra the orangutans hardly ever venture onto the forest floor, as the Sumatran tiger, a predator, still roams there. When walking on the ground, the feet and hands are clenched and bent inwards.

Every night, orangutans make simple nests to sleep in. They bend branches together to form a platform - it only takes about 5 minutes to build. Sometimes they make a roof over the nest to protect them from the rain. They all sleep lying on their side, cushioning their head on their arms.

The orangutan's distribution has been steadily declining over the years. While exact orangutan population counts are always a challenge – various estimates put current counts at between 50,000-65,000 orangutans left in the wild – we do know with certainty that 2,000 to 3,000 orangutans are killed every year. Its ancestors' remains have been found in 14 million-year-old deposits in Punjab, India. Fossil remains also show that a giant race of orangutans existed in China 500,000 years ago. They also lived as far south as Java. Today the population is restricted to parts of Borneo and the north of Sumatra. In Borneo, its range has come under further threat from the forest fires of recent years, which destroyed millions of hectares of rainforest, killing many orangutans, and driving others into the open, forcing them to beg from humans for food.

Indonesia suffers from one of the highest rates of deforestation, most of it illegal, with around 3 million hectares lost each year - that’s 10 football pitches every minute! Deforestation has always been the main threat to the orangutan, but the reasons for this have changed.  Initially, the international demand for hardwood fuelled the growth in the industry and even today much of the wood product exports from Indonesia come from illegal sources.

The greatest reason for this loss recently is through palm oil plantations. Firstly the land is clear cut and then the wood debris is burnt, illegally, to get rid of it quickly; the ash also acts as a good fertilizer for the soil.  The burning of forests makes Indonesia the world’s third largest emitter of greenhouse gases, with 75% of its emissions a result of deforestation. Indonesia and Malaysia are the largest palm oil producers in the world with demand for it increasing as a bio-fuel (to be used as an alternative to petrol or diesel), as well as its use as an ingredient in one out of every 10 supermarket products such as crisps, chocolate and detergents.  To find out more read the Palm Oil factsheet in the Related Resources section below.

Burning the forests kills thousands of orangutans every year and once exposed, they are more vulnerable and can easily get shot, especially if they are found in the palm oil plantation itself, caught searching for food among the farmers’ crops.  Logging roads make the forests much more accessible to poachers.  Sometimes they kill the mothers and sell the infants as pets.

The Trade in Baby Orangutans

Many unscrupulous private zoos have in the past paid high prices for baby orangutans. Today, orphaned orangutans are sold as pets in Borneo and Sumatra. Baby orangutans are obtained by shooting their mothers and many babies die before they are sold. A few are lucky to be rescued and taken to special rehabilitation centres to be reared and returned to the forest. The forests to which the orangutans are returned must be protected to ensure their survival.  Deforestation simply opens up the jungles to poachers who have even greater access to the babies.

Mining for gold causes about a tenth of the damage done to the rainforests, even in protected areas where open pit mining scars the landscape and mercury pollutes the rivers and kills fish and other animals.

These threats have resulted in a huge reduction in the number of orangutans and their slow breeding rate is not sufficient to boost numbers in the wild. As a species they are seriously endangered and could become extinct within the next ten to twenty years.  Although breeding them in captivity may be a way to prevent orangutans from becoming extinct, the only way to ensure their survival in the wild is to protect their forest habitat.

Image: Orangutan by Tambako The Jaguar

'Orang' and 'utan' are the Malay words meaning 'person' and 'forest'; the orangutan is literally a 'person of the forest'. Apart from humans, the orangutan is the only one of the five great apes - the orangutan, the gorilla, the common chimpanzee, the bonobo (pygmy chimpanzee) and human - to live outside Africa and is the largest tree living mammal in the world. It is less closely related to humans than the other three great apes, but is still strangely human-looking.

The two sub-species living in Borneo and Sumatra differ a little in appearance. Sumatran orangutans are generally slimmer and lighter-coloured than their Bornean counterparts. The Bornean male has larger cheek pads than the Sumatran.

In 2017, a third species, the Tapanuli orangutan, was identified.

Fruit makes up half the orangutan's diet. Orangutans are very intelligent and seem to be able to memorise the geography of their surroundings and will travel great distances through the forest, managing to arrive in a particular area just when the trees have ripe fruit. When there is plenty of food in an area, an orangutan may stay there for as long as the supply lasts, often sharing the area with several other orangutans; little social interaction goes on and they usually leave singly.

The orangutan, who wants to ‘be like you’ according to the Jungle Book, has taken this a step further and has been spotted using tools for fishing!  Although they spend most of their time in the trees they are drawn to rivers and ponds for healthy, meaty nutrition.  This is impressive considering orangutans are no good in water and couldn’t swim even if you asked politely.

Research teams from America and Canada who studied the apes for several years saw many orangutans teach themselves how to jab at catfish with sticks.  Using sharp sticks the apes jabbed the water from the water's edge, or by holding onto branches and reaching towards the water.  The panicked prey would then jump out of the pond to be caught by the waiting orangutan.  You won’t find many primates fishing in the jungle, but it does happen.  Chimpanzees and some monkeys fish with their hands, but to fish with tools shows a greater intelligence.

On most occasions orangutans were seen fishing alone, but every so often they would fish in pairs and look as if they were teaching others how to get their own healthy treats.  This impressive feat can tell us more about our origins as humans.  Humans and orangutans are known as ‘hominids’ because we belong to the same biological family known as Hominoidea.  This means that we are very closely related in terms of evolution and ancestry.  In fact, we share 97% of our genes with orangutans.

Clever orangutans who discovered that they could grab fish along the shore of rivers and ponds started to use sticks to help them further, making the move from catching fish by chance, to setting out to catch them deliberately.  The effort that the red apes put into fishing highlights the importance of marine food in a healthy diet, for orangutans and also for humans.

Fish contain nutrition which aids brain growth, and strong evidence of fish eating in our biological family dates back 2 million years.  However seeing the orangutans learn how to fish and teach fishing within their community suggests to researchers that meat-eating has been going on a lot longer than suspected and probably originated from before what is known as the Homo genus - that is the family from which we homo sapiens, or humans, evolved.

Orangutans may breed at any time of year as food is plentiful all year round. They do not pair for life and, as mentioned previously, a dominant male usually mates with several females. Gestation lasts for 8.5 months and the baby weighs about 1.5 kg at birth. It is totally dependent on its mother, suckling from her and travelling round by clinging to her body. When a little older, it wanders about on its own, sometimes walking along the branch behind its mother clinging to the hairs on her rump.

The youngster is weaned at around 2-3 years. A youngster may become semi-independent when about three years old but usually continues travelling with its mother until she gives birth again.

Since females do not mate until their last offspring is about six years old, they may only manage to raise two or three babies in a lifetime.