The short-eared owl is a widespread species, found in many countries. 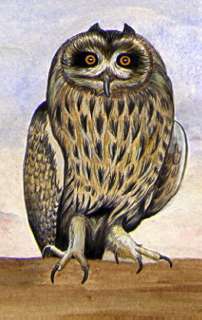 Food: mainly voles, but also other small rodents and birds.

Short-eared owls are nomadic, that is they move around the countryside, gathering where the populations of voles and mice are highest. The short-eared is the owl most likely to be seen by day in Britain, as it flies over fields or marshes, quartering the ground for prey. Groups of birds may be spotted hunting together in this way. They glide turn and hover low over the ground, then drop with raised wings, flying up quickly if they miss their prey. The owl relies on its excellent hearing and sight to locate its prey. If successful, the prey is seized in the bird's sharp talons and swallowed head-first while the bird is still on the ground.

When it is not hunting, the owl often sits quietly on a post, or in a tree, waiting and watching. It may also regurgitate pellets containing the indigestible remains of food such as fur and bones.

Its numbers are regulated by the population levels of voles and other small rodents; there are probably about 1,000 pairs of short-eared owls in Britain when voles are scarce, but after a glut of voles, there may be 5 times this number.

The owl is a predator at the top of several food chains, and if numbers of its prey were to be drastically reduced in some way, then it would follow that the owl's numbers would also suffer. Destruction of suitable owl habitat would also affect it.

Although the short-eared owl is the owl most often seen during the day, it is difficult to actually find one. The bird has very sharp eyes and, in open country, can spot a birdwatcher from a great distance! The best time to look out for one is during the breeding season when parent birds are frequently flying down to the ground to feed their young. If you find a baby owl, leave it alone. It is unlikely to have been abandoned, and will call to its parents so they know exactly where it is.

Some short-eared owls seen in Britain in the winter are migrants from Scandinavia, and these return to their northern homes in April at the beginning of the breeding season. Many short-eared owls breed in Britain, although they may spend the winter in Ireland, France, Spain and other parts of Southern Europe.

During the breeding season, the male performs a courtship display flight over the breeding territory, singing a special song to attract a female.

The nest is usually just a hollow on the ground, scraped out by both birds, and lined with dry grass, heather or brambles. Normally, four to seven eggs are laid, but when rodent numbers are high, there may be as many as fourteen. The eggs are laid at two day intervals, and the female incubates from the first one. Each egg takes 24 - 28 days to hatch. During incubation, the female relys on her mate to supply her with food.

To begin with, the owlets' eyes are closed and they are covered in white down, which soon changes to a light brown colour. Both parents feed the brood and defend them fiercely from intruders. From two weeks onwards, the youngsters begin to explore their surroundings, hiding in nearby undergrowth. They do not leave the nest area until they can fly well, at about three weeks old.

If the food supply is good, a pair of owls may manage to rear two broods. The owlets wil be ready to breed by the following spring.