Tamarins and marmosets are the smallest monkeys (primates) in the world. The golden lion tamarin is the largest and related to the golden headed and golden rumped tamarins - all are among the most endangered of all mammals. 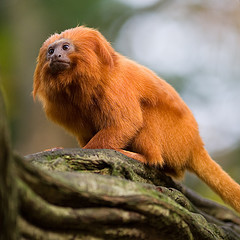 Distribution: found only in a stretch of coastal rainforests, southwest of Rio de Janeiro, Brazil, mainly in the Poco das Antas Reserve.

Habitat: areas of primary forest, that is forest that has not been affected by human interference.

Tamarins and marmosets are the smallest monkeys (primates) in the world. There are 8 marmosets and 14 tamarins in the family. The pygmy marmoset is the smallest monkey of all and is 14cm long, weighing only 90g. The golden lion tamarin is the largest and related to the golden headed and golden rumped tamarins - all are among the most endangered of all mammals.

The golden lion tamarin lives in extended family groups high up in the tree tops. During the hottest part of the day the family usually hides in dense foliage, out of the direct sunlight. The tamarins spend much of the day playing with each other in a quarrelsome fashion, jumping easily through the trees, using their very long and partly webbed fingers to grip the branches. Grooming is an important daily activity and helps to bond the family together. They even pick and clean each others teeth.

Tamarins within a family are very sociable but they are extremely aggressive to intruders. If excited or frightened a tamarin raises its mane, bares its teeth and calls out with high-pitched shrieks. Adults of the same sex sometimes fight to the death. When not playing or resting, the tamarin searches for food. It is an omnivore, eating both meat and plant material, collecting it from tree tops.

Golden lion tamarins breed at any time of the year and keep to one partner. The gestation period is 5 months and usually twins are born. The male, as is usual in marmosets and tamarins, helps with the birth and takes the babies from the female and washes them. The new-born baby looks just like its parents but with shorter hair. It clings to its parent's body tightly with its hands and feet. The male is an excellent father, carrying his babies around for most of the time, handing one over to its mother every 2 to 3 hours; she suckles it for about 15 minutes and then hands it back to the male.

At about 3 weeks old, the youngsters start to explore their surroundings, darting back to their parents if alarmed. They will ride on the parents' backs until they are 6-7weeks old. At 4 weeks, the babies begin to eat soft food. The father may even peel and mash a banana in his hands to feed to them. They are capable of looking after themselves at 3-5 months but for some time they continue to run to their parents if danger threatens, and will beg food from them.

At 15 months of age, the tamarins are sexually mature and many young stay with their parents and live as extended families. The older youngsters often help with care of younger brothers and sisters.

The attractive appearance of the golden lion tamarin has been its downfall in the past. The species has been known to Europeans since they first explored Brazil and it has been popular as a pet since the seventeenth century. European ladies used to keep one, as was the fashion, in their muffs. Later, the pet trade was joined by a trade in the animals for zoos and research.

The export of tamarins is illegal (although the practice is known to continue) but the forests are being felled at an alarming rate. It has been estimated that only two or three per cent of the golden lion's original wild habitat is still in existence. Unlike some of its relatives, the golden lion tamarin will not move to and settle in disturbed forest. Forest destruction is the main reason why it has become an endangered species. Probably less than 150 survive in the wild - no-one knows the exact number - and these are mainly restricted to the only remaining coastal rainforest in a 5,000 hectare reserve known as Poco das Antas, which was created in 1974 by a dedicated Brazilian biologist, Dr. Adelmar Coimbra Filho, who had been studying tamarins for many years.

Intensive conservation efforts restored their numbers to 3,700 by 2014. But now, yellow fever, transferred from people via mosquitoes, is putting the tamarin’s recovery at risk. In May 2018, the first tamarin death due to yellow fever was recorded in the wild following an outbreak of the mosquito-borne disease across Brazil. Horrifyingly, 32% of the population disappeared in a single year after that.

Although the reintroduction scheme appears to have been successful so far, it will be several years before anyone can be certain that the effort involved has been worthwhile.

Mature forest now covers less than 10 per cent of the reserve. Habitat improvement is essential if the wild and captive-bred tamarins are to survive. Education is important too and a programme has been set up to help the local people to understand the importance of conserving the remaining forest.

Several zoos around the world co-operate in the breeding of the golden lion tamarin, moving individuals among the various zoos to prevent inbreeding. Over 50 tamarins a year are born in captivity. Hopefully, it will be possible to introduce many of these to the wild in future years.

For more information on helping protect the tamarins, visit: https://www.savetheliontamarin.org/annual-glt-day