Walruses are found in the sub-zero temperature Arctic seas from Alaska, Canada and Greenland to Russia. 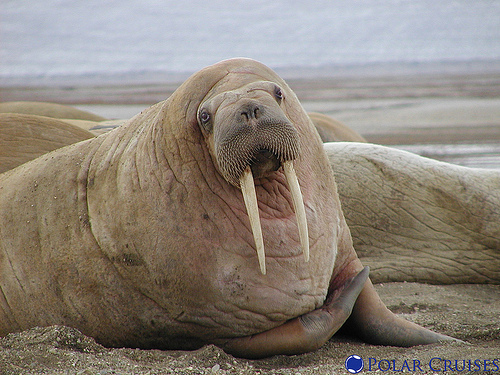 Distribution: Arctic seas from Alaska, Canada and Greenland to Russia.

Habitat: open water, near to shore or on ice floes.

Walruses have very thick skin and underneath this, a layer of blubber which can be up to 15cm thick. They need this kind of protection from the sub-zero temperatures of the Arctic seas in which they live.

Sometimes walruses 'haul out', either onto rocky shores or ice floes. Quite often, they use their tusks like ice axes to help them get a better grip as they climb out of the water.

On land walruses are clumsy. Their feet have been flattened into flippers and, when on land, they turn their back limbs forward so that they can lumber along on all fours. The bottoms of their flippers are warty to allow them to grip ice better. In water, the hind limbs act as the walrus's propellers, while the forelimbs are used as rudders.

In the Arctic winter, walruses head south. Unlike seals, they are unable to survive under pack ice because they cannot make holes in the ice to breathe through. When spring comes, the cows and immature animals head back north, but adult males linger in the south for longer.

Walruses will eat other marine invertebrates such as shrimps, worms, octopuses, sea cucumbers and some fish. They will even attack seals, grasping them with their forelimbs and slashing at them with their tusks.

The walrus is still considered threatened as it breeds slowly and lives in a fragile habitat sensitive to pollution or overfishing.

According to the IUCN there is insufficient data to classify all the subspecies of Walrus. The popularion of Walrus is still large, but it is thought that two of the subspecies are in decline and that climate change is having a detrimental effect particularly for the Pacific subspecies. Therefore the official classification at present is Vulnerable.

The Inuit, indigenous people of the Canadian Arctic formerlly known as Eskimos, are still allowed to hunt walruses, as they have done for many hundreds of years. Walrus skins are used to make oil. The tusks are also used to make ornaments. As the Inuit now use high-powered rifles rather than traditional fishing lines to hunt walruses, their potential catch has been greatly increased.

Breeding takes place between January and March. Large herds of bulls, cows and calves gather together and the bulls fight for the cows. Those with the longest tusks are those who get to mate with the cows, and each victorious male will mate with several.

Mating takes place in the water, and a single calf is born about 15 months after mating, often as the herds are heading back north after the winter. The female hauls out onto an ice floe to give birth to her calf, which measures 125cm at birth. The calf first travels by hanging onto its mother's neck, but it is quickly taught to swim and is quite a capable swimmer by two weeks of age. The calf feeds on its mother's rich milk for at least 18 months, but begins to eat solid food after six months and after a year will usually have tripled in weight. The calf separates from its mother after about two years, and attaches itself to a herd of young walruses.

The walrus is a large, flippered marine mammal which has a thick layer of fat, called blubber, under its skin to keep it warm.  Males can grow to an enormous size, with some growing to a weight of over 2000 kilograms. The walrus' fatty skin accounts for up to 20% of its total body weight.

The walrus has a muscular body which it uses to manoeuvre through the water. Its four flippers help with steering and it is also able to turn its rear flippers forwards in order to help it move on land.

The snout of the walrus is covered in sensitive bristly whiskers called mystacial vibrissae. A walrus can have up to 700 of these whiskers, each reaching 30cm in length. They are attached to muscles and are used for foraging for food. Nerves in the whiskers mean that the walrus can use them to recognise shapes to help it find shellfish to eat.

A walrus's tusks are modified canine teeth which grow throughout the walrus' life. Tusks can be up to 60cm long in females, and up to 1m long in males! One of longest walrus tusk ever recorded was 94cm long, 27cm in diameter and weighed over 5kg. The tusks are also status symbols, and the larger the tusks, the more important the owner of them will be in a herd.