The humpback whale can reach a maximum length of 17 metres, with the female larger than the male. The size and weight is also impressive. A 15m humpback weighs more than 41,000kg and its heart 190kg. 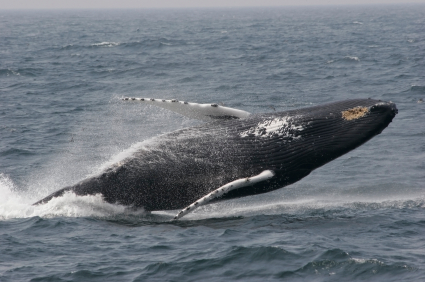 Gestation: About one year. The calf when born is 5m long and weighs 2000kg

Distribution: In all the oceans of the world

Historically the Humpback Whale was one of the first whales to be hunted. It tends to stay in coastal waters, especially during its migrations, and was easily available to land-based whalers. It is a fierce fighter though, and so it was not until the advent of the explosive harpoon that it was killed in large numbers. Humpback whales sink when harpooned, and their oil is not of as good quality as that of the right whale, but a 15 metre humpback can yield up to 33 barrels (5,455 litres) of oil, so it was still a good catch. Its meat could also be eaten, or used to make pet foods, its bones could be used to make glue or bonemeal fertilizer and its fat for soap production. Its whalebone was used in corset stays, and the baleen was made into hairbrushes.

The food of the humpback is largely made up of krill - small shrimp-like crustaceans some 2-3cm in length. To catch them, the whale opens its vast mouth and takes in a large quantity of water full of krill. The 2-36 grooves below the throat help the mouth to expand more widely. Then the mouth is closed, and the water squirted out of the sides of the mouth, through the hanging curtains of hairs, called baleen, which trap the krill. When all the water has been expelled, the tongue is run over the baleen to remove the krill. The average humpback needs at least one tonne of food each day, containing about one million calories.

Humpbacks in the northern hemisphere have a more varied diet than those in the southern hemisphere, and feed on capelin, squid and shoaling fish such as mackerel and herring. They may use breaching and tail slapping to startle fish when hunting, and rising bubbles or 'nets' of air can confuse and enclose prey.

The humpbacks spend the spring, summer and autumn months in cold polar seas where there is plenty of food, but when these seas freeze over in winter, they migrate to warmer climates near the equator, where although there is little krill to eat, less energy is used up in staying warm. Migrations tend to hug the coasts, and during these movements they are sometimes seen in British waters.

Since the humpback feeds like a gigantic suction pump, it cannot be a very selective feeder. 'The Transactions of the National History Society of Northumberland' in 1831 records one humpback washed ashore dead at Berwick in September 1829. It reports that "on opening the mouth, six cormorants were found in it, another in the throat so that it was presumed that this whale had been choked in an attempt to swallow the birds." Perhaps the birds had been feeding on the same fish as the whale, and had also found their way into its vast mouth.

What do Justin Bieber and whales have in common?

Both can spread their tunes throughout the world!  Researchers in Australia have found some surprising results after studying the singing culture of humpback whales.

Do you sing songs that you’ve heard on the radio?  Music comes to our ears from all over the world as a transfer of culture - along with other cultural things such as art, television, films, ideas and beliefs.  “But”, I hear you cry, “humpback whales don’t have radios!”  No, but they do have the world’s oceans to spread their songs.

Male humpback whales sing strange and complicated songs through groans, moans, growls, cries and shrieks.  They found that whales repeat ‘phrases’ over and over for up to thirty minutes, just like a repeated verse of a song.  All males from the same population or area all the sing the song, but this song is constantly changing.

Using special equipment and technology the research team found that four new songs had come from a whale population in Eastern Australia.  Two years later and 6000 km away whales in the middle of the Pacific Ocean were singing the same tune!  They believe that whales learn the songs as they hear them during migration.

So just like us humans, whales share and pass on their culture through communication.  For the first time ever we have discovered a non-human species which participates in this fast transfer of culture, communicating to one another on a large scale - I wonder what stories they tell?

To hear a whale song for yourself visit ‘TheOceaniaProject’ on You Tube.

Humpbacks return to the same breeding areas, in warm coastal waters, each year. Solitary males are thought to 'sing' most regularly, perhaps trying to attract a mate. Whales in a breeding stock all tend to sing a very similar song, which is quite different from the songs of whales in other breeding stocks. The songs last from 6-35 minutes, and range in frequency from 40-5,000 Hz.

Mating has never been directly observed, but whales seen diving together and then rising vertically to the surface, belly-to-belly, have been assumed to be mating. Calves stay close to their mothers for at least a year, taking at least 40 litres of milk from them each day for the first five months.

The humpback is a rather 'lumpy' animal, and can reach lengths of 17 metres, with the female larger than the male. The head and jaws carry numerous wart-like knobs, which seem to serve no useful purpose, but which may be equivalent to a beard on a human male.

The front edges of the flippers (which are up to 4m long) carry so many of these that they are wavy in outline, as is the deeply notched tail fluke. Their colour is variable: always black above, and dark through to almost white below.

The size and weight is also impressive. A 15m humpback weighs more than 41,000kg, its heart 190kg and its whalebone also 190kg. Yet at times the humpback is seen to leap clear of the water ("breaching"). This may be part of mating behaviour, or simply high spirits. Breaching may also serve to remove barnacles and lice, which often attach themselves to these slow-moving beasts.

They can swim at speeds of up to 27km/h, although normally they swim considerably slower at 4-14km/h.

Though barnacles are a mere discomfort, young humpbacks do have natural enemies and are prey to the killer whale and perhaps the giant squid.