Whales are warm-blooded mammals and the largest creatures on earth. The magnificent blue whale is the largest animal that has ever lived on this planet. It weighs more than 2,000 people!

There are about 80 species of whale and these are divided into two main groups, based on their method of feeding: 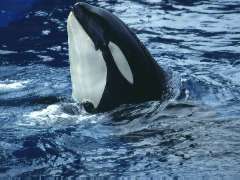 Toothed whales: have sharp teeth lining their mouth with which they catch and eat other marine mammals and fish. Whales belonging to this group include the sperm whale, killer whales (orca), dolphins and porpoises.

Baleen whales: have a mouth lined with rows of keratin plates which act like a sieve, straining the sea water to extract the tiny sea creatures known as krill. This group includes the blue whale, the humpback whale and the minke whale.

- Whales can communicate with each other by creating a series of high pitched noises which sound like singing, and can be heard in open waters more than 200 miles away!

- Whales travel in herds, often migrating year after year to the same areas.

- Whales normally "cruise" at about 6 knots - twice as fast as a person usually walks. They are capable, in short bursts, of speeds up to 15 - 20 knots and have been known to keep pace with large ocean liners.

- The brain of an adult sperm whale may weigh up to 9kg - the largest of any animal. Part of the brain where thought processes take place is highly developed. It has yet to be proved whether or not this means that whales are intelligent, but there is no doubt that these complicated brains are used for complex communication.

- Whales are air-breathing and can dive to thousands of metres. Their blowhole (or blowholes as the case may be) is on the top of or left-hand side of the head. Breath is emitted under considerable pressure, sometimes reaching heights of 7 metres. Individual species of whales can be recognised by their characteristic blow.

Stone Age people were hunting whales for food as long ago as 2,200 B.C. They hunted slow-swimming, coastal species such as the bowhead, grey and right whales. This subsistence hunting is still practised by some societies such as the Inuit people of Greenland and North America, where the whale plays an important part in the people's survival.

It was from the seventeenth century onwards that the whaling industry began to develop as the demand for whalebone and whale oil increased. Sperm and humpback whales were hunted to such an extent that their numbers began to decrease. Whalers were able to hunt the faster roquals, such as the blue whale, when the explosive harpoon-gun was invented and faster ships were developed.

South Georgia became the whaling centre of the world in 1905, when the whalers moved into Antarctic waters. Huge factory ships processed the slaughtered whales at sea. During the 1930-31 season 30,000 blue whales were killed and processed. By the 1950s the blue whale had practically disappeared. The whalers then started hunting the smaller species such as the fin, sei and minke whales.  Luckily for the Blue Whales their numbers are increasing, though are still a vulnerable species, listed as Endangered on the IUCN Red List.

Many people consider that the method of slaughtering whales is extremely cruel. Although whaling fleets may be highly sophisticated, equipped with sonar, helicopters, long-range explosive harpoons and factory ships, the actual kill is barbaric. The whale is killed by a 90kg, 2 metre-long iron harpoon, shot from a 90mm cannon. The harpoon head contains a time-fuse grenade which, literally, blows the whale's insides apart seconds after impact.

The International Whaling Commission (IWC) was established in 1946 to manage the dwindling stocks of whales. Each year quotas were set for each commercial species i.e. the maximum no. to be killed each year, but these were often ignored and whales continued to decrease. It was during the 1970s that conservation organisations realised that action was needed to prevent the extinction of the great whales. In 1975, the Convention on International Trade in Endangered Species of wild Flora and Fauna (CITES) gave full protection to several species including the blue, grey, humpback and right whales. International pressure on the IWC continued and in 1986 it finally put a limitation on whaling.

Despite this ban on whaling, a few countries have refused to stop and are campaigning to lift the ban altogether, even though most countries agree with it. Norway, Iceland and Japan still have large whaling fleets and continue commercial whaling, often under the pretext of 'scientific research'. In Japan, whale meat is popular as a delicacy.

Counting whales: it would be easy to hunt a species of whale to the point of extinction because whales mature slowly and do not reproduce quickly. Therefore, accurate information about them is necessary. Conservaton groups, such as Greenpeace, try to keep an eye on whaling activities and make their own whale population studies.

It is not easy to count whales. The individuals of some species have distinctive markings, making them easy to recognise, but others do not. Whalers used to mark a whale with a stainless steel dart which lodged in its blubber. When the whale was caught, the recovered dart then gave information about the whale's movements and age. This darting can also help with population estimates. Similar darts, called 'spaghetti tags', with colourful streamers, have also been developed, which mean that the whale can be monitored without being killed - but they are not yet widely used. Another method of counting whales involves spotting all the whales along an imaginary line (a transect) drawn across the sea. Sightings taken by sea and air give an estimation of the population density of a particular area.

The general public worldwide considers commercial whaling to be cruel and unnecessary. Nowadays whales are well-loved by many people all over the world and whale-watching trips are a popular holiday highlight. Many conservationists see whale-watching as an effective alternative to whale-hunting; a way to turn live whales into a source of income from tourism and at the same time strengthen their popular image.

Public pressure can be a powerful influence - it is perhaps only continued international protest, aimed particularly at those few countries still insisting on whaling, that will ensure whales remain protected in the years to come.

Status of Some Whale Species 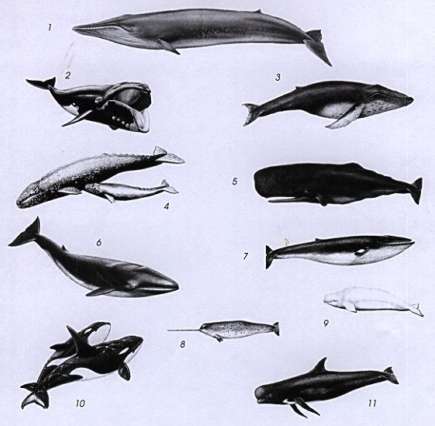