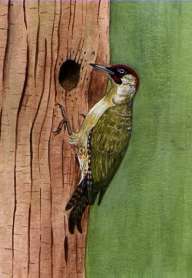 Distribution: Widespread over England and Wales; during the last 40 years it has spread rapidly northwards and reached central and eastern Scotland. Also central and southern Europe.

Food: Mainly ants but also wood-boring insects and their larvae, beetles, moths and flies. Will also eat fruit and seeds.

The birds are so fond of ants that they will fly long distances from their nest sites to find a good feeding place. The green woodpecker has become a specialist feeder and eats about 2,000 ants a day. When it has found an ants' nest it tugs at the grass and digs out a hole about 8cm deep. The ants are licked up as they rush out. The long sticky tongue can also fish for ants deep inside the ants'nest. The eggs, larvae and pupae of the ants are also eaten. A woodpecker may feed at a large ants'nest for more than an hour, returning again and again for weeks.

Although ants are preferred, green woodpeckers will also eat any insects they can find, extracting them from the ground or from the bark of trees. Some birds have been known to raid bee-hives in search of bees and grubs.

Green woodpeckers are well-camouflaged when amongst the trees and are difficult to spot. They are more often heard than seen - their loud, ringing "yaffle" is easily recognised. The green woodpecker is, in fact, sometimes called the ‘yaffle’ or ‘yaffle bird’ after its call.

Green woodpeckers seldom 'drum'on trees as do others species of woodpeckers; however, they are more likely to do this in the breeding season between April and August. The 'drumming' is actually a contact call, made by the bird hammering its bill on branches. During the winter male and female green woodpeckers live separately but stay in the nesting area all year round. In spring, the birds call loudly and begin to visit each other. During courtship, the male flies in a spiral fashion round tree branches. When males fight over a female they sway their heads from side-to-side, wings spread out, tails fanned and crests raised.

Sometimes one of the winter roost holes is chosen for nesting. If not, the pair spends 10-30 days excavating a new hole in a tree trunk. When the nest is ready, the female lays five to seven small white eggs. The nest is unlined.

Both male and female share the incubation of the eggs, which takes 17-19 days, and they both feed the young for about 19 days. When the brood leaves the nest the parents may split up, each caring for 3 or 4 youngsters until they can fend for themselves. The young woodpeckers can fly within three or four weeks after hatching. They are capable of breeding at a year old.

There are around 52,000 pairs of green woodpeckers in the UK at the moment. There used to be many more but the destruction of woodland and changes in farming methods have led to a widespread decline in numbers. In the past, pasture was left unploughed for many years and this allowed large ant colonies to become established. Sometimes you can see the large nests of the yellow meadow ant in old fields. Today, pasture is ploughed regularly, re-seeded and fertilised to produce richer grazing for livestock. This practice destroys the ants' nests and the ants do not like living in the cool moist conditions produced by the tall grass. Despite the reduction in their habitat and food supply, the green woodpecker manages to remain fairly widespread in the lowlands of Britain.