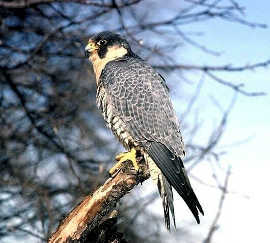 The peregrine falcon is the largest British falcon, living in wild uplands and rocky coasts. It may be spotted in the Scottish Highlands and Islands, in the Lake District, Devon, Cornwall, Wales and Ireland. It is an impressive hunter, its main prey being birds up to the size of pigeons which it can catch in mid-flight. Peregrines declined in numbers drastically during the 1950s and they are a specially protected bird under the Wildlife and Countryside Act. There are now about 1,500 pairs in Britain, including 24 in London.

Reasons for decline - the introduction of organochlorine pesticides, such as DDT, had a disastrous effect on all Britain’s birds of prey. These poisons accumulated in the food chain, and, the peregrines, being at the top of the food chain, accumulated such large quantities of the substances from their prey that their breeding success was affected. The eggs were either infertile or they had fragile shells, easily broken. Peregrines have also suffered from persecution by gamekeepers and egg collectors.

The future - organochlorine pesticides were finally banned in 1976 and since then the peregrine falcon population has begun to recover. Some individual birds nesting in areas where they could be vulnerable to egg collectors are guarded by volunteers.