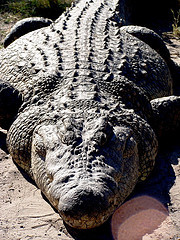 Crocodiles were revered by the ancient Egyptians but nowadays they are generally regarded as ugly, fearsome and dangerous creatures. Relentless hunting has severely reduced a lot of crocodilians. As of 2020, 7 of the 23 crocodile species were listed as critically endangered and 4 were listed as vulnerable.