Rivers are part of human’s culture. Thousands of years ago, early humans settled by lowland rivers and later used them for transport from one settlement to another, and for power to drive flour mills and other machinery. Our larger rivers, such as the Thames and the Severn, were used by large industrial boats and, as a result, stretches of the rivers had to be dredged deeply to maintain a deep channel. This prevented any natural development of the river bottom. Today, much of this industrial traffic has disappeared only to be replaced by pleasure boats. The larger boats still need the deeper channels and smaller craft require the removal of water plants, thus reducing habitat for wildlife. The wash from fast motorized boats erodes the river banks, floods the nests of animals and washes away wildlife.

A lowland river left in its natural state bursts its banks every year and floods the surrounding area. To prevent this from happening, the meandering rivers have been straightened over the years, their banks reinforced to stop erosion, and the submerged plants cut back or removed. The demands of our modern-day society for hydro-electric power, irrigation, fishing, boating etc, means that river management is essential.

One of the most important aspects of management is the careful monitoring of water quality, which is carried out by the frequent sampling of water and testing for impurities. This is to keep a check on perhaps the most dangerous of all of our effects on rivers... Pollution! 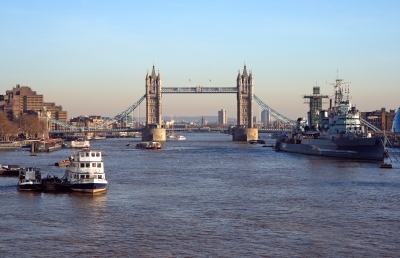 For hundreds of years we got rid of our waste into rivers and streams, but it was the growth of the industrial revolution during the nineteenth century that resulted in the rivers suffering the greatest pollution they have ever known. By the middle of the 1800s, the Thames was so polluted with raw human sewage that the stench was overpowering! Several epidemics of cholera broke out, causing much human suffering, and, of course, the effect on the river’s wildlife was devastating. The last record of a salmon was in 1833 and by the 1950s, the only fish left was the eel. Since then, a serious clean-up campaign has enabled even the salmon to return to the Thames. Strict bye-laws now control the discharge of effluent (waste discharged from a particular process) by riverside industry but modern development still presents problems. Every year, up to 11,000 tonnes of rubbish are collected from the Thames!

The following things can be the source of types of river pollution;

The Environment Agency (EA) keeps an eye on the rivers and tries to prevent people causing pollution. It is against the law to cause any type of water pollution. Whereas many types of pollution have been recognised and reduced, we have too be careful that others do not become worse. One of the biggest problems today is eutrophication i.e. the natural growth of water plants, especially algae, is speeded up by the presence of an unnatural abundance of nutrients, supplied by certain effluents (such as artificial fertilizers); when these plants die and decay, the bacteria acting on the decaying material use up so much oxygen that little is left for other water life. The rapid plant growth also blocks out the sunlight, which results in the death of underwater plant and animal life.

Read More: Why Britain's rivers are at risk