The wild cat was once common over most of the British Isles, but it is now only found in Scotland and are under threat with an estimated 400 in the wild. 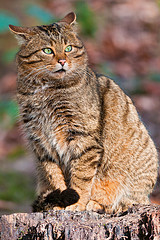 Daily Life: the wild cat is a carnivore, hunting mainly at dawn and dusk; it either lies in ambush to pounce on its prey, or stalks it until fairly close and then rushes in to attack.

Normally, only one litter is born a year. Wild cats interbreed easily with feral cats (domestic cats that fend for themselves in the wild) and hybrids (the results of a cross between a wild cat and a feral cat) will often produce a second litter in late summer. Feral cats tend to revert to the tabby form and can cause confusion when identifying wild cats. Interbreeding may have caused an apparent reduction in size of wild cats during this century and not all wild cats are distinctively striped as a 'pure' wild cat should be.