There are many reasons why rainforests are important which can be put under the following headings:

Rainforests contain about half of the existing plant and animal species in the world.
They contain a third of the world’s bird species and 90% of its invertebrates.

The remaining African rainforests contain more animals and plant species than are found anywhere else on the continent.  In just one year in 2006, 19 new species of lemur were officially recorded in Madagascar.

In 2.5 acres of the Amazon there could be 300 different tree species, compared to the 40 found in the whole of the UK!

Hundreds of rainforest plants are used in modern medicines. It is estimated that 25% of all our medicines come from plants growing in the rainforest. For example, Vincristine, a drug taken from the rosy periwinkle of Madagascar has allowed an 80% remission rate for some forms of childhood leukaemia. Curare, a poison used by Amazonian Indians on arrow tips can be used as a muscle relaxant if given in small doses.

Only about 1% of the plant species have been studied, so potentially there could be many more cures to illnesses waiting to be discovered.  In Madagascar, 80% of the plant species are endemic - that means they are not found any where else on earth.  Yet 2/3 of their forest has already been destroyed.  With 20% of all the world’s plants under threat of extinction, Kew Gardens in London is taking DNA samples, in case the plants and their benefits are lost.

An estimated 80% of the world’s diet originated from rainforest plants.  Many food sources are still being discovered in rainforests. The 'peach palm' of Brazil produces up to 300 peach-like fruits a season. The fruit has twice the food value of banana and more protein and carbohydrate than maize. 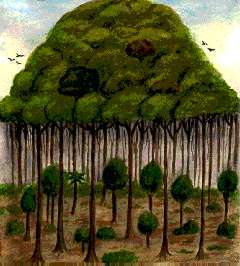 During heavy downpours, the mass of vegetation in the rainforest catches and holds much of the rain, then 'disposes' of it through evaporation and transpiration; it acts like a bog umbrella breaking the force of the rain and protecting the ground surface. Where trees are cut down in large numbers, this natural protection is removed, soil erosion increases and minerals are washed away.

Trees also help to control the amount of water that is held in the soil. In areas around the world where forests have been felled, the rainfall patterns have changed. In some places, the rains have almost stopped falling, and in others, flooding has been caused. 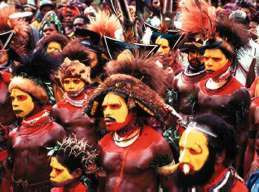 In South East Asia and the Pacific Islands, people have lived in the forests for about 40,000 years, but the earliest signs of human settlement in African forests are no more than 3,000 years old. There are about 1,000 indigenous tribes in the rainforests of the world. Rainforest tribes have managed to develop ways of life which allow them to use the forest without destroying it. Whilst other civilisations have grown further and further from the natural world, these tribes have had to grow close to nature in order to survive.

European settlers have caused many of these tribes to be wiped out due to their lack of immunity to Western diseases.  They now face a new threat as big logging, plantation, oil and hyrdoelectric companies try to force them off their traditional lands, often using violence.

Millions of indigenous people depend on rainforests for their survival and over a billion make their livelihoods from its products.

See our fact sheet Rainforest Tribes below for more information.

Read More: What are the Threats to the Rainforests?