Which big cats can be found in South America? 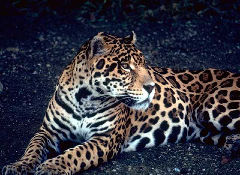 Jaguars are still common in the upper basin of the Orinoco river in Venezuela, but the The IUCN lists the Jaguar overall as 'near threatened', with perhaps no more than 200 remaining in the whole of Argentina. In the 1960s, hunters shot more than 1,000 Brazilian jaguars every year. Fur hunting, along with loss of habitat to farming are the greatest threats to the jaguar's survival. Hope may come from zoos though, as jaguars breed successfully in captivity.