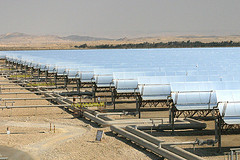 The Sahara is the largest hot desert on earth (some deserts are cold like the Gobi desert in Asia) and can reach temperatures of 50°C.  Using solar photovoltaic panels with such an abundance of sunshine will produce three times more power than a PV solar panel in the UK.  By the year 2050 these projects hope to generate 15% of Europe's energy through solar and wind power.  There are a few problems to solve first such as how to stop sand causing damage to the solar panels.  Cleaning them daily uses up a lot of water - something that isn't common in the desert!   But if technology can solve some of these problems then we will be doing a big favour to the world.  Who knew the desert could be green?