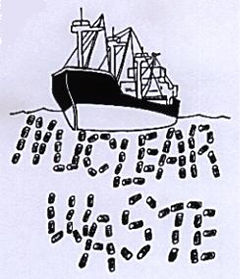 Nuclear radiation occurs naturally throughout the world and universe, but it comes in many different forms (including human-made forms), some more poisonous than others.  All forms of nuclear radiation travel in invisible rays, some rays are weak and would not pass through a piece of paper, but other rays can pass straight through metal.  In the same way some rays can pass into our bodies, or be eaten or breathed in - but other rays are too big and cannot.  So, it is this invisible radiation which is causing worry, as it can spread miles and miles in the form of clouds, affecting other countries.

Since 1952 low levels of radioactive waste have been discharged into the Irish Sea, the English Channel and the Arctic Ocean.  It is recognised that radioactive material needs to be isolated and encased (in glass and concrete) to prevent leakage on the ocean floor and it is now kept on land for some time whilst radioactivity levels decrease.

What long term effects might this have on marine environments?  Certainly radiation can enter the food chain though plankton and kelp and then go on to contaminate fish.  Radioactive caesium and plutonium has already been found in seals and porpoises in the Irish Sea.

On 11th March 2011 the tragic earthquake and tsunami that hit Japan caused major damage to the Fukushima Daiichi nuclear power plant.  This natural disaster caused thousands of tons of radioactive water to be released into the Pacific Ocean.

Radioactivity levels reduce over time, although this can take anything from two weeks to  five hundred thousands years or more before reaching a safe level.  This kind of waste also needs to be safe from terrorism and natural disasters.  Lack of available space on land and its proximity to people has meant that storing it at sea has been seen as a safer and more straightforward option.  Any leakages are much more easily dispersed over a greater area in the sea, than in the air, although they can travel further through water.