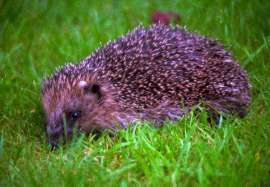 You may have noticed that your pet cat, dog or rabbit begins to grow a thicker coat as the days become shorter in the autumn. This, of course, happens with wild mammals too, such as foxes, badgers and squirrels and the extra fur helps them to keep their body temperature constant during very cold weather.

Autumn is a time of preparation for mammals. They fatten themselves up by eating as much as possible. Squirrels, voles and mice take advantage of the autumn harvest of fruits and nuts, storing some of these away in various places, ready for eating on winter days when food is scarce.

Smaller mammals lose heat more quickly than larger ones and so they must burn up their fat fast to keep warm. This is why mice and voles make themselves cosy, underground nests during the winter, and sleep there on the coldest days. In this way, they save energy by being inactive. Squirrels and badgers also save energy by sleeping through spells of bad weather. Foxes and deer can remain active throughout the winter because of their larger size.

The mammals which find it most difficult of all to cope in the winter are those which rely mainly on invertebrates for their food. Most invertebrates, as we have seen, are hard to find during the winter. The only way the insectivorous mammals can survive is to slow their body processes to almost a standstill – and they do this by hibernating.

The hedgehog is perhaps the most well known hibernator in Britain. It fattens up on slugs, snails and other minibeasts in the autumn, and spends the cold months curled up in a cosy nest of leaves and dry grass. Bats, which rely entirely on insects, also hibernate, wrapped in their wings deep in a cave, tree or attic somewhere. During its deep sleep, a hibernating mammal’s body temperature drops well below the normal 37C (it feels very cold to the touch), its heart beat slows to as little as three or four per minute, and it breathes only every two minutes or so. Hedgehogs and bats do not stay asleep for the whole winter. They will wake up on warmer days and look for food or water. If the temperature drops too low, they will also wake up and start shivering in order to keep the body temperature above freezing. Physical disturbance will also awake a hibernating hedgehog or bat. Every time they wake up a great deal of energy is used up, so a long, cold winter is better for these animals than a winter with lots of warm spells.

The dormouse is the only hibernating rodent in Britain. Both the common dormouse and the introduced edible dormouse are known as true hibernators because they sleep from October to April without waking up at all. Both species fatten themselves up in the autumn with extra food, often doubling their summer weight. The common dormouse (not now thought to be as common as it used to be) eats pollen, flowers, insects and fruits – but in the autumn its most important fattening-up food is hazel nuts. A winter nest is built on or near the ground, among tree roots or beneath a hedge. Here the dormouse curls up, its fluffy tail wrapped over its head for warmth, and ‘switches off’ to such an extent that it can be picked up without being woken!