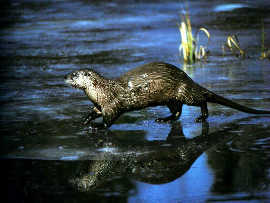 The otter is a member of the weasel family which, although a land mammal, has adapted to life in the water. It lives by rivers, marshes, lakes, and along some coastlines and sheltered estuaries, hunting at night for mainly fish.

During the day, the otter rests in thick vegetation on the river bank, or in a hole, called a holt, amongst the roots of a tree. The otter has no enemies except for humans who used to hunt it for fur, for sport or to protect fish stocks.

Until the 1950s otters were widespread across Britain but in the late 1950s and early 1960s they suffered a sudden crash in numbers. They disappeared completely from many areas and in England small populations are now found only in the South-West and in East Anglia. In Scotland and Wales, otters are more numerous, although not abundant.

Reasons for decline - farmers began to use organochlorine pesticides in the 1950s and these were washed into rivers and worked their way up the food chains. These either killed the otters or affected their breeding and immunity to disease. Water pollution from herbicides, fertilizers, farm slurry, industrial effluent and sewage also added to the problem. Modern farming methods have destroyed much of the otter’s riverside habitat and boating and fishing have disturbed the shy otter in previously quiet waterways. In January 1978 the otter was declared so rare that it was given legal protection and in 1981 the practice of otter hunting with specially bred dogs named otter hounds, was banned.

The future - organochlorine pesticides are now banned and freshwater pollution has been reduced. Conservationists have encouraged landowners to manage their land with otters in mind and they have also organised the protection of stretches of well-wooded riverbanks to safeguard the otters living there.

The Otter Trust, based in Suffolk, has, since 1983, bred otters and reintroduced them into now suitable areas where they were previously wiped out. Thanks to the banning of harmful pesticides, protective laws and better habitat management the otter is now confirmed present in all England's counties - a happy ending for the otter, extinct in most of the country only 60 years ago.