Britain has not always been an island - it was once attached to the land mass of the Continent. The last Ice Age ended about 10,000 years ago, and as the ice melted, the animals gradually spread northwards across Europe. At the same time, the forests began to cover the land - first birch, Scots pine and juniper and later, oak and alder as the land became warmer and wetter. With no sea as a barrier, it was possible for land animals to move freely across Europe and spread into the areas that are now England, Wales, Scotland and Ireland. Those that arrived before around 7,500 years ago, when the sea, swollen with melting ice, swept through the swampy land between England and France, are known as our native species e.g. red squirrel, badger and grass snake. Seals, bats, birds and other animals are not restricted to the land, are known as native if they breed in Britain. 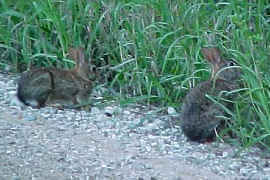 Quite a few of our better known wild animals were introduced to Britain by man, either deliberately, or accidentally in cargo ships. For example, rabbits were brought to Britain by the Normans in the 12th century because they were a useful source of meat and skins. Of our 60 present-day species of mammals, 18 have been introduced.

Many of our largest mammals, fish and birds of prey were hunted to extinction or died out as their habitats were destroyed.  Wolves, lynx, reindeer, moose, wild boar, beavers and bears used to roam the countrysides before we spread out into the countryside and changed woodlands and wilderness areas.

The plants of Britain have followed a similar historical pattern. For example, before the British Isles were separated from the Continent, there were 32 established species of broad-leaved trees, 3 species of conifer and a few shrubs. All other trees now growing were introduced by man - many hundreds of species of trees and shrubs may now be found growing in Britain.