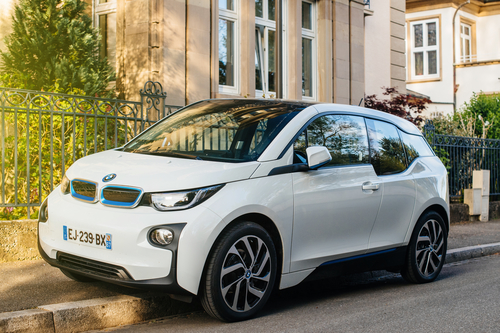 They are greener as soon as they start being driven

We have seen above that electric cars actually have a greater environmental impact than fossil-fuel powered ones when they are being made.  But that balance is reversed as soon as a car starts being driven.  When an electric car is being driven, it emits nothing.  In comparison, a fossil fuel powered car emits CO2 and a collection of other gases and particulates.

The UK’s Society of Motor Manufacturers and Traders (SMMT) states that the average CO2 emissions for a new car sold in 2016 was 120.1g/ km, which is equivalent to 193.3g CO2 per mile.  So if we discount the fact that most official emissions figures are considerably better than those achieved by drivers in real-life conditions, and we were to drive 2016’s average new car for 135,000 miles, it would emit over 26 tonnes of CO2 over its lifespan.

Using figures from TNO, the Netherlands Organisation for Applied Scientific Research, the average compact car actually produces an average of 275g CO2 per mile in real-life driving.  Using that as our benchmark and travelling the same distance, the car would emit over 37 tonnes of CO2.

The US Environmental Protection Agency (EPA) sets the average annual emissions much higher, at 4.7 tonnes of CO2 per car driving 11,400 miles per year, which equates to 412g CO2 per mile!  That typical American car would emit a whopping 55 tonnes of CO2 emissions to travel 135,000 miles!

With any of the above numbers, we need to remember that a further 6 tonnes of emissions are produced in the drilling, refining etc. of the fossil fuels needed to drive a petrol or diesel car for 135,000 miles.  That’s because the process of drilling for oil and gas releases around 57g CO2 per kWh of fuel produced.

To drive an electric car 135,000 miles using electricity coming from a mix of 80% fossil fuels and 20% renewables causes CO2 emissions of around 23 tonnes.  To travel the same distance when the electric car is receiving its charge from 100% renewable energy will cause just 2 tonnes of emissions.

So even in a country with an energy infrastructure based around coal and gas-fired power stations, an electric car has much less impact over its lifespan.  Given that most public recharging stations in the UK use 100% renewable energy, using an electric car here will create much lower emissions than a fossil fuel-powered car.  People who have bought electric cars also tend to use 100% renewable tariffs to charge their vehicles at home, increasing the likelihood of lower emissions.

Read More: We can see the future (but it's not here yet!)