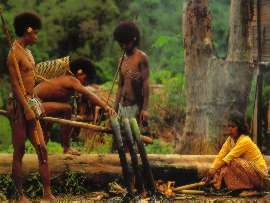 Children in hunter gatherer communities begin learning the tools and skills of their culture by imitation from a very early age. While a young person from the Mbendjele people of northern Congo-Brazzaville may not go to school, or learn to read written words, a toddler would be starting to learn how to cut meat with a sharp knife and a child of primary school age would have an excellent understanding of collecting yams or using a machete.  There is more importance placed on independence from a young age.

When food is shared equally between members of a small hunter gatherer group, it is seldom necessary for anyone to work for more than two or three hours a day to ensure that everyone will have enough to eat. The rest of the time can be spent playing games, talking, sleeping, relaxing or exchanging gifts.

People who live in such communities are often physically fitter than those in societies where their lifestyles are less active. However, largely as a result of disease, around 43% of hunter gather people globally do not live past 15 years old. Of the 57% who do, only 64% of these go on to live past 45 years old, though some people live into old age. Those who die younger may also do so as a result of violence or accidents; hunting for food is not without risks!

With threats to their homelands, language and cultural practices, young people from some hunter gatherer groups are leaving their clans to go to college and university. There, most learn about either medicine or law, with many returning to their homelands to act as doctors, nurses and legal advisors for their own people, in order to protect their way of life for generations to come.