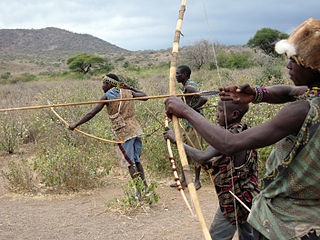 A hunter gatherer is a person who lives in a society where food is collected by hunting wild animals or by searching for wild, edible plants.

Archaeologists have suggested that the earliest humans in the Lower Paleolithic probably lived in areas of woodland. This meant they had access to a wide range of nuts, seeds and fruits. People would also seek out rivers and coastlines for fishing and finding shellfish. It is sometimes believed that the earliest humans scavenged meat from animals already killed by other predators. Later, they learned to hunt wild animals themselves, developing tools such as spears to use.

Until the earliest development of agriculture (growing and tending plants and animals in large quantities to provide food for a society) hunting and gathering was the way that humans had survived since pre historic times. Around 12,000 years ago, early farming practices started to be developed in the Middle East, parts of Mesoamerica, some areas of Africa and South East Asia, and the Andes. Nowadays, the vast majority of humans live in societies where food is produced via farming and industrialised methods of production.

However, some hunter gather societies do still exist, and lifestyles in these communities have remained unchanged in many respects, over thousands of years.

Read More: An Economy Based on Money