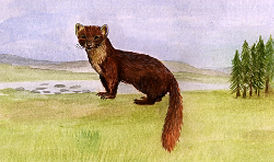 Breeding  Pine martens breed only once a year, mating in July or August; the female's pregnancy does not begin until January. This is called 'delayed implantation' and occurs in other mammals too, including the badger. A litter of about 3 babies is born in late March or April, often in a nest previously lived in by a crow, magpie or squirrel. At birth, the young are blind and are covered in a thin coat of yellowish-white hair which changes to grey and then to brown as they mature. The babies spend at least six weeks in the den before they venture out and the family stays together until they are six months old.