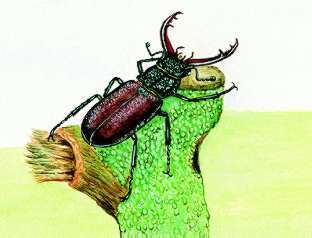 Adult male stag beetles emerge in May or June, depending on the weather, followed shortly after by the females. The male has strong wings underneath the wing cases (elytra) and he flies at dusk in search of females. The flight can be rather erratic and the beetle sometimes flies indoors through open windows or doors, attracted by the light - and sometimes he bumps into things and crash lands.