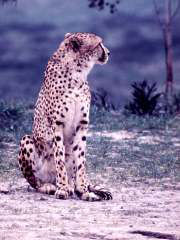 The cheetah (Acinonyx jubatus) is very different from all other cats, much longer-legged with blunt and partially retractile claws - that is, they cannot be completely withdrawn into the sheaths.