Humans have used animals such the donkey, horse, camel and mule for transport for thousands of years. Animals have also been used to help pull farm machinery and to carry soldiers into war. There is still a mounted police force on horseback, while modern cavalry units still ride horses for ceremonial duties in the UK today and animals, known as ‘beasts of burden’ are still used to help people carry out many types of work. Some animal rights campaigners would support the use of animals for working purposes, as long as they were being well treated and cared for. Others would argue that using animals for any purpose is wrong, as they have no say in the matter. 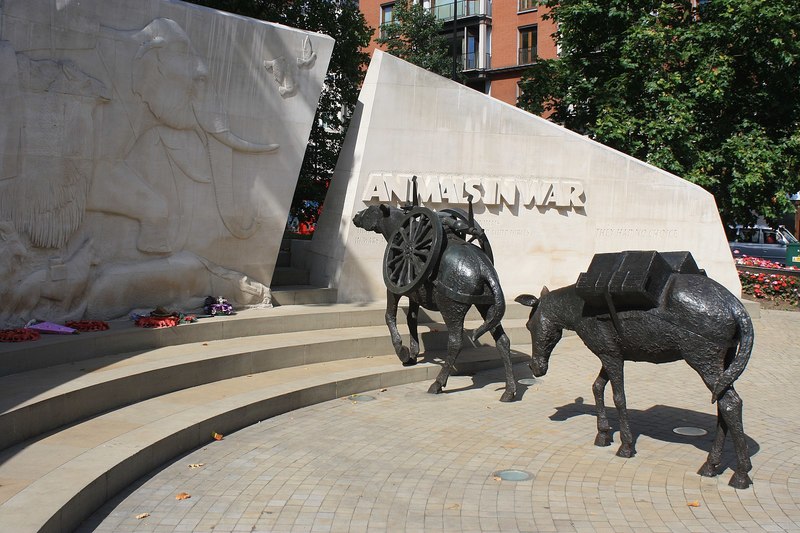 Horses have carried soldiers into battle since ancient times. As prey animals, their quick responses and speed when afraid mean that they were well suited for use by soldiers. The oldest known manual for training horses to pull a chariot for use in battles dates back to c. 1350 B.C. By the end of World War II, horses tended to be used less in battle, but they were still used for transportation of troops and supplies. There is a statue called The Animals In War Memorial in Hyde Park, London commemorating the millions of animals that have been killed over the years in battles.

Dogs are also used in war and in work. Their ability to sniff out a scent make them useful for detecting people and explosives, or for delivering messages. Sniffer dogs are used to this day by the police, by the army and in search and rescue missions.

Some of the creatures that humans have used in times of war may not be so obvious. During WWI and WWII, carrier pigeons were commonly used to send messages back to base. Pigeons have a ‘homing’ instinct and will fly many miles to return to their roost. This meant they could be trained to bring messages back from behind enemy lines. It was dangerous work, and led to many pigeons being shot down in case they were carrying secret information.